The Afghanistan Policy Group (APG) and the Friedrich-Ebert-Stiftung Afghanistan Office organized a talk show in the historic city of Kandahar, in collaboration with Ariana TV. 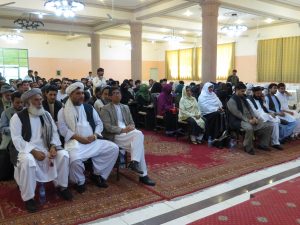 Participants of the Talk show event, Photo by FES Afghanistan

The media event is third in a series organized by FES Afghanistan on the theme “Afghanistan, the Region and the World” in an effort to reach out to the Afghan public and policymakers and to encourage a robust debate about critical security issues confronting the region and prospects for regional cooperation.

The panelist of this talk show included Dr. Homayoun Azizi, Governor of Kandahar, Mr. Said Ishaq Gailani, one of the steering members of the APG, Mr. Khalid Pashtoon, Member of Parliament from Kandahar, Mr. Khalid Aziz, convener of the Pakistan Policy Group (PPG), and Dr. Farooq Azam, the former Minister for Education of Afghanistan.

The main issues discussed during this event were security, counter-terrorism and counter-narcotics. All the panelists emphasized on the importance of cooperation between Afghanistan and Pakistan in combating these security challenges and the need for better perception management in both countries to bridge the bilateral trust deficit that has derailed cooperation and been exploited by insurgents on both sides of the border.