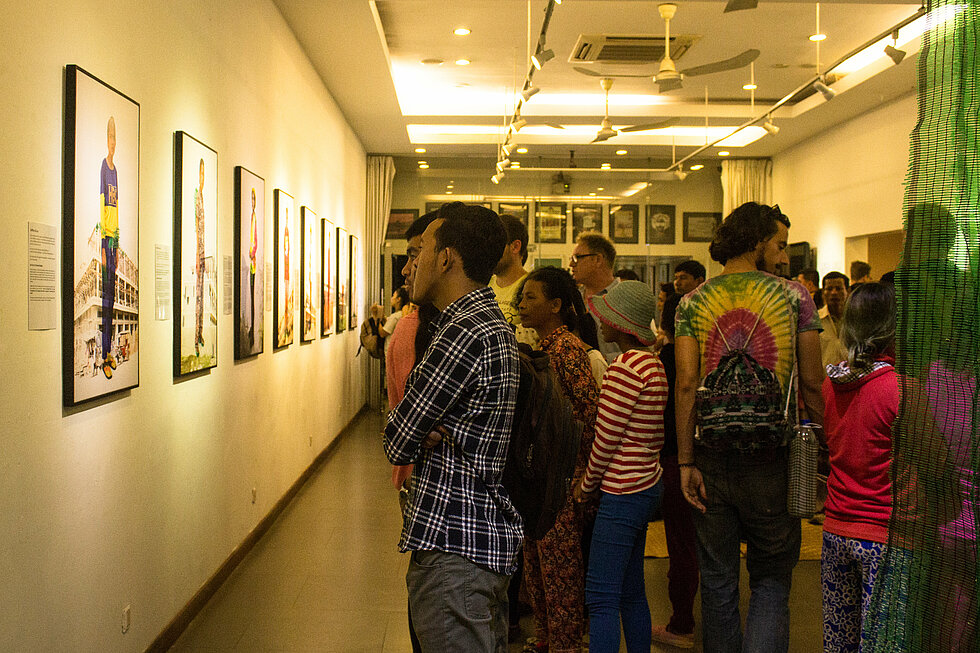 Zinc fences and green mash nets wall off construction sites. With it the daily life and experiences of construction workers that populate a city turns invisible.

In Phnom Penh, the sight of zinc fences and green nets attests to a booming real-estate and construction industry in Cambodia. As many as 200,000 workers are hired, mostly as day labourers. Many of them have relocated from rural areas of Cambodia in search for work, with large infrastructure projects and land grabs shrinking habitable spaces and contributing to the making of new urban working class.

An estimated 20–40% of the construction workers are female. Often in the lowest paid positions, reports the non-profit CARE, female workers in the construction industry have no access to equal pay for equal work, with little voice to advocate for improved working conditions, earning an estimated US$3 to US$5 per day, compared to US$5 to US$7 per day for male workers.

On display until 22 January at the Cambodian-German Cultural Center “Meta House” in Phnom Penh is a photography exhibition, “The Green Net” that documents the life stories of 13 female construction workers in Cambodia. The exhibition is part of “Another Brick in the Wall,” a multimedia project, outcome of a collaboration between “Meta House” and Friedrich-Ebert-Stiftung (FES).

Led by two female Cambodian professionals, photographer Sophal Neak and researcher/blogger Chea Kesorphearom, the project used large-sized prints and a blog platform to produce visual and narrative portraits of female construction workers. In cooperation with Meta House, we render here one portrait of the female workers who shared their life story.

Som Sodyna, 37, whose hometown is in Takmau, is struggling to make ends meet as a construction worker. She was a garment worker before becoming involved in this sector with her husband for about a year. Having trouble with her health is one reason why she quit the garment factory and entered the construction sector.

Despite the exhausting and extremely difficult nature of construction, Dyna did not give up. She is working hard for a daily wage of 20,000 Khmer riels. Normally, she assists one skilled construction worker, but sometimes she assists two to help her colleague out, that’s where the challenge begins. Sometimes, when urgent, she needs to carry many piles of tiles at a single time. Besides carrying tiles, she also mixes limestone and has to carry that as well. She said mixing limestone is tiring because she has to bend down constantly to mix it.

Also, aware that this kind of job is transient, Dyna wants to change occupation. “This job is not permanent. If given an opportunity, I would like to do something else. I don’t want to be stuck on construction site forever.” She wants to expand her knowledge and learn vocational skills – sewing and tailoring. However, she doesn’t have enough savings since she needs to spend daily on her family and repay a debt to a Microfinance group. Comparing her previous life with working as a construction worker, she said, “It has always been difficult. But in the construction sector it’s easier to get money because payday is twice a month.”

Dyna said the government and the construction companies should respect this sector and not underestimate it because many of the jobs are for unskilled labour. “Some people from the countryside don’t have any skills, so when they don’t know what to do for a living they will work in the construction sector. Therefore, minimum wages and some basic rights such as rights to paid holiday should also be awarded. That’s a way to help us, construction workers, especially female construction workers.”