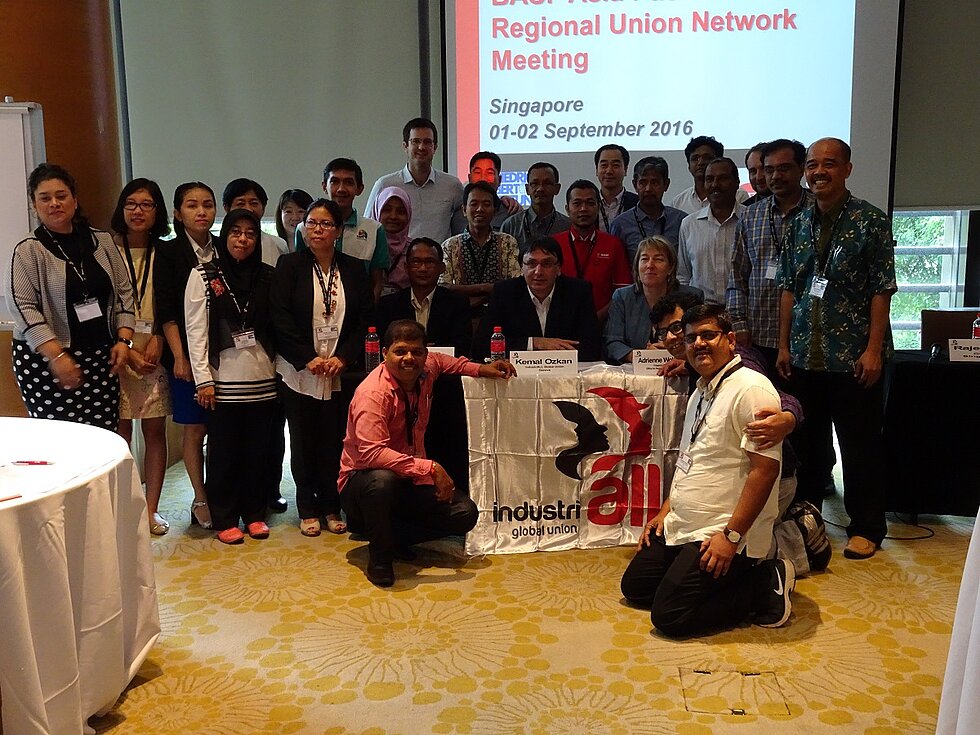 Trade unionists from BASF plants across Asia affiliated to IndustriAll Global Union met on 1st September in Singapore for a two-day workshop to initiate the BASF Regional Network Asia for workers across the region to exchange experience, information and knowledge.

Organized by IndustriAll with the support of Friedrich-Ebert-Stiftung, the workshop brought together participants from India, Indonesia, Malaysia, South Korea and Vietnam who learned about the structure of BASF―the German multinational corporation―its commitment to global social and labour standards as well as their inadequate implementation in most of the company’s plants in Asia.

Malaysian plants are among the worst” ―Mohd Narzi Ali, Secretary of the local Trade Union at BASF plant in Johor Bahru, Malaysia

In the workshop discussions, workers testified to diverging experiences across the different working sites. For Mohd Nazri Ali, “Malaysian plants are among the worst.” A worksite Secretary of the local trade union at the BASF plant in Johor Bahru (Malaysia), Mohd founded together with fellow workers their union in 2012, but the local management has consistently delayed the negotiations of a Collective Bargaining Agreement. According to Shashikant Bandal, trade union leader at the BASF Thane plant in India, the local management is oblivious to the international standards to which BASF commits. “When we demand the implementation of the UN Global Compact, they say it’s none of their business; when auditors from the German headquarters come, they look at the papers, but they never talk to the workers” says Shashikant who has worked at the corporation for 20 years now. “Our demands are simple: we want the standards that BASF promises to be implemented at our plant.”

We want the standards that BASF promises to be implemented at our plant” ― Shashikant Bandal, Trade Union Leader at BASF Thane, India

Building on these experiences, the participants developed strategies and ideas on how to work together more closely in order to create more leverage against the management of the company in support of demands for decent medical facilities, reasonable working hours and equal treatment of every employee. Suryani, a maintenance worker at the BASF plant in Merak, Indonesia, since 2010 was outraged by the testimonies, “we have to organize internationally, to support our colleagues; and the information we received will also help us to strengthen our bargaining efforts in Indonesia.”

We have to organize internationally, to support our colleagues” ―Suryani, Maintanance worker at the BASF plant in Merak, Indonesia

The two-day workshop is part of a long-term aim by IndustriAll to create a sustainable BASF Global Network of trade unionists. Regional networks of BASF trade unions already exist or have been initiated in Europe, Latin America and North America. A global meeting of BASF workers’ representatives was held in Hannover in 2015. Such an international platform shall increase the leverage for workers’ demands in global supply chains and further foster international solidarity among workers.