An analysis of traditional and non-traditional security threats and contextualization of the geopolitical and economic situation in the Indo-Pacific.

Our latest publication looks at the opportunities and challenges facing blue economy goals and the sustainable use of ocean resources for economic growth and activity in the Indo-Pacific region. It explores and considers the security threats, how economic and geopolitical concerns overlap (and how cooperation could be fostered) within the framework, and the likely contexts where states pursue blue economy goals in patterns of contest and cooperation.

The Indian Ocean connects a vast array of countries, from Somalia to Australia. It contains an overabundance of economic opportunities, untapped energy reserves, territorial disputes, and environmental issues. Seeking to address this myriad of issues is the ‘Blue Economy’ (also known as the Oceans Economy), which has its roots in the Rio 2012 United Nations Conference on Sustainable Development.  At its core, the blue economy seeks to balance extracting the financial potential of oceans (fishing, renewable ocean energy trade routes etc.), while protecting it from over-exploitation that would otherwise lead to environmental degradation (e.g. overfishing). Essentially, it aims to disentangle economic and social development from environmental exploitation and degradation.

Within the Indian Ocean, the top three concerns are the harnessing of renewable ‘blue’ energy from the ocean, increasing coordination between oil & gas extractors with the renewable ocean community, and increasing cooperation in constructing and managing seaports.

Sustained cooperation is essential for states to achieve any of the blue economy goals listed above, and because different states have different levels of control in maritime spaces, cooperation is often very difficult. The region is home to direct military threats (state to state violence) and non-specific threats that don’t originate in one specific state (climate change, food insecurity, natural disasters etc). While there have been many pledges and declarations made by states situated in the Indian Ocean to achieve blue economy goals (as seen in the Jakarta Declaration on Blue Economy of 2017), there is still room to improve state-to-state cooperation. Many blue economy goals are still hotly debated within the Indian Ocean, as many littoral states face the effects of climate change but only see marginal returns from tapping into the natural resources surrounding them.

In the following paper, Dr Sinderpal Singh, Senior Fellow at the Institute of Defence and Strategic Studies (IDSS) at the Rajaratnam School of International Studies (RSIS) in Singapore, analyses the traditional and non-traditional security threats, contextualizes the geopolitical and economic situation in the Indo-Pacific (highlighting broader geopolitical tensions as well as illegal, unreported and unregulated fishing), and lists out the best- and worst-case scenarios regarding inter-state cooperation. 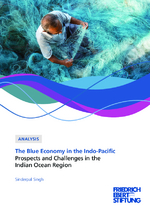 The blue economy in the Indo-Pacific

Prospects and challenges in the Indian Ocian region
Bangkok, 2022 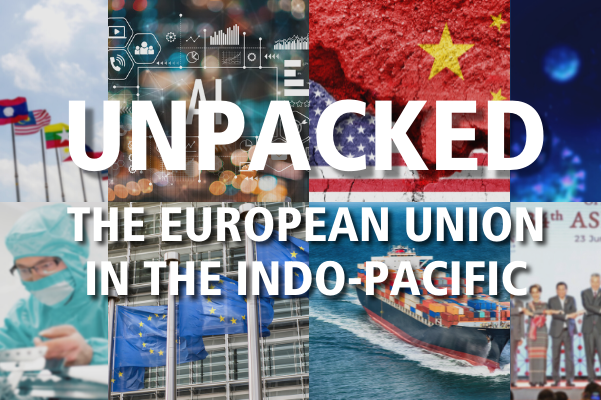 Vlog launch: The EU in the Indo-Pacific

FES in Asia is premiering a new video blog series that puts the spotlight on the role of the European Union in the Indo-Pacific. Find out more!