China is a critical component of the global financial architecture as both a member of the international institutions and as an institution-builder. Our latest report addresses the question of where to find areas of common interest in which to work with China, encouraging it to be a productive and engaged partner in the global order.

The structure of the international financial architecture and its purpose in providing the essential public goods of financing for development and a global financial safety net has evolved significantly since its creation in 1944. A major factor has been the rise of China, in its role as a member of existing multilateral financial institutions as well as a builder of new ones. As G7 countries in particular have sought to come to terms with China’s rise within the multilateral system, growing geopolitical conflicts are now placing further stress on the existing architecture.

To better understand China's role in the global financial architecture, the Asia-Pacific Department of Friedrich-Ebert-Stiftung (FES) has recently published a new report by Paola Subacchi titled China and the Global Financial Architecture - Keeping Two Tracks on One Path. Subacchi is currently a Professor of International Economics at Queen Mary University of London, and previously served as the Director of International Economics Research at Chatham House for over ten years. Her report provides important background information for key discussions on the global economy and development, made even more important by recent geopolitical events and geoeconomic shifts.

Subacchi concludes, among other things, that to fit China into the evolving international system, the Bretton Woods Institutions need to be reformed. Achieving an international balance in the global processes of economic rule-setting depends on this. At the same time, new institutions are needed to accommodate China’s quest for better-distributed governance. Integrating old and new institutions within the same system should result in improved and more inclusive provision of global public goods.

The challenge for the G7 – but also for like-minded countries in the G20– is to work out how to get the best possible outcome while dealing with China. In other words, what can be done to encourage China to be a productive and engaged partner and thus create the conditions for harmonious coexistence with the rest of the world?

For Subacchi, it is critical to identify low-hanging fruits and work in areas where policy-makers who have been managing the international financial architecture have long-standing collaboration. Common interests should underpin international dialogue and policy cooperation. This report identifies these interests in specific areas such as development finance and infrastructure investment, debt relief and debt sustainability, cooperation on strengthening domestic macroeconomic frameworks, economic growth and the challenge of environmental sustainability, as well as a strong and responsive financial safety net backed by a reformed and more representative IMF.

Ultimately, action should be directed towards areas where there are some genuine learnings from mutual engagement – for example, economic development. China is undergoing a complex and gradual economic and social transition that will take another two or three decades to conclude. To fit China in the world economy, it needs an institutional framework that is inclusive and rules-based. Countries should work collaboratively on global economic issues, and this mutual collaboration should be based on common interests rather than shared values. The risk otherwise is that the world’s largest economies and China will head down two separate paths with no way to converge.

This report is part of an FES publication series, which examines Chinese approaches in a range of different global policy fields. The overarching theme is the future of multilateralism in the face of China's rise as a world power and increasing competition for values and norms: How can we initiate a constructive negotiation process between Europe and China on the framework conditions for global governance? In which areas is more coordination and cooperation with China possible, and where, on the other hand, must Europe increasingly take countermeasures and do its own homework, for example, in order to be perceived as a reliable partner in emerging and developing countries? 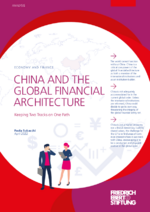