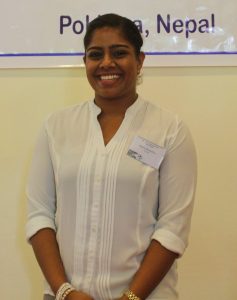 “As cabin crew members we hardly get involved with airport workers, but their unions join hands at negotiations,” says Dharini Denipitiya from Sri Lanka, a flight attendant with Sri Lankan Airlines and member of the Flight Attendants Union (FAU).

Dharini is among 23 members from thirteen workers’ unions in Asia and Pacific to participate at a four-day workshop on organizing civil aviation workers, taking place in Pokhara, 13-16 September. The Airports Organizing Workshop is a joint undertaking by the global federation of workers’ unions in the transportation sector ― International Transport Workers’ Federation (ITF) and Friedrich-Ebert-Stiftung Nepal Office.

The use of aviation “flags of convenience” (FOCs) and “social dumping,” consequence of liberalisation and deregulation also of the aviation industry, have had severe impact over the working conditions and labour rights of workers in the civil aviation, not least in the Asia region. At the workshop, participants focused on learning about approaches to organize across the different sectors in the civil aviation, as a way to address the many challenges they face at their working place in a new environment in the region brought about by a shifting nature of a global political economy.

As cabin crew members we hardly get involved with airport workers.

“The two workshops I have attended have taught me to look at issues from a different angle and are very useful,” attested Dharini from Sri Lankan Airlines’ Flight Attendants Union (FAU). “I learned how to organise [airports] and set targets to overcome issues and threats we are facing now. As cabin crew members we hardly get involved with airport workers but their unions join hands at negotiations.”

This was the third in a series of workshops for civil aviation unions taking place since November 2015. Exchanging skills and networking, participants learn and connect to stand stronger and firmer for labour rights. The recently won victory for staff rights when Qatar Airways removed its contractual pregnancy and marriage prohibitions heralds the prospects for a more just future, when workers stand together.