Three young political activists from Southeast Asia share their thoughts about political participation and organizing at a time of a rising economic integration, heightened discord and contentious talks over maritime sovereignty, democratic and disputed changes in country leadership, the fall of old and rise of new forms of authoritarianism. 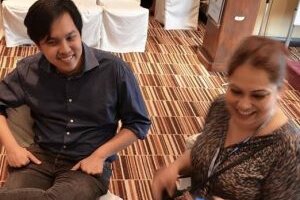 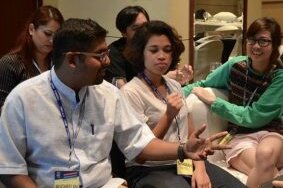 In early June, 20 young political activists from South-East Asia gathered in Pasig City in the Philippines to participate in a Political Management Training organized by the Network for Social Democracy in Asia in partnership with the Friedrich-Ebert-Stiftung Philippines Office and the Olof Palme International Center.

This training comes at a time of a rising ASEAN economic community, heightened discord and contentious talks over maritime sovereignty in the area, democratic and disputed changes in country leadership, the fall of old and rise of new forms of authoritarianism in Asia.

We spoke with three young participants about some of these issues—their thoughts about the training and the engagement by youth in political life. Nalina Nair is a member of the Malaysian Democratic Action Party where she works closely on women’s and publicity affairs and supports work on electoral reform. Shamah Bulangis is member of the youth wing of Akbayan Citizens’ Action Party―Philippines democratic socialist party―where she is active as organizer in the Negros Oriental province and works on sustainable change with the Danish Social Democratic Youth. From Thailand, we spoke to Rackchart Wong-arthichar, a former student union organizer, now media strategist from the New Democracy Movement and Citizen Resistance, currently working on an awareness campaign about the upcoming referendum for the new constitution.

How did you all get involved in the training?

Rakchart: I was pursuing my master degree when the call for participation was sent out and I saw I was eligible to apply. It’s a great opportunity to get new ideas and seek out new ways and strategies to organize and strengthen my organization.

Nalina: I’m here representing my party. Looking at the agenda got me all hyped up. I said to myself “Oh my, I get to speak about politics, day and night, for six days, which doesn’t happen very often back home.” But it’s not just about talking – it’s about learning of and understanding other policies as well, things we may have missed out on in other ASEAN countries and that can be tailored to our demographics. I really like this whole concept of meeting across the ASEAN member-states. And the best thing about this was meeting your peers, since back home, I usually discuss politics with older generations.

Shamah: I am here as part of Akbayan Youth’s building on its second-liners and cadres. I was very interested to join as you don’t see much of this type of training in the Philippines. What you see usually are leadership trainings, for business and social entrepreneurship skills. The area of politics is a different struggle in itself and this training recognizes that the political engagement is also an avenue for change to happen. That’s very interesting to me. I also want to meet new friends from Southeast Asia, since we come from an internationalist organization. In as much as possible we also wanted to know the issues happening in other countries and join in solidarity with friends from countries who face similar issues.

Do you agree with the view that young people aren’t really interested in politics?

Nalina: I have to agree with that. There is a strong fear factor among young people in my country to be closely associated with the opposition and it is a huge problem.

Shamah: I disagree that young people are disinterested. But I agree that people tend to be hostile to joining a political party. Maybe they’re affected by a jaded rhetoric that politics is dirty, corrupt and shouldn’t be practiced by young “innocent” people. But politics is not dirty in and of itself; it’s bad because of the people who abuse it.

Nalina: Yeah, even when I first joined [the DAP], people who are senior to me kept asking me with hesitation, “Do you really want to join?”

Rackchart: Today, with social media, we can see many problems much more clearly. More students can see that they’re being oppressed in the system. They can see the oppressive policies in school. And social media helps a great deal in recruiting young people. However, most of the young people leave social movements after some time in order to focus on studies, work or else. Many, I get the impression, feel there’s too much talking, too many meetings. But the thing is, changes don’t happen with a single click.

Shamah: And a lot of young people want things “instant”, by the way they reason, you know like, instant noodles…

Nalina: I think, in terms of people wanting instant things all the time, there’s a dumbing down in our society. If only people took the time to look at the past, many of the regimes did not change after only five years. A lot of the people in my country like to talk about immigrating to the West, but these things that they are looking for in the West were fought for hundreds of years.

Rackchart: That’s why it’s crucial for our organizations to talk about long-term strategies or plans, build stronger structures.

From your interaction with the other participants, do you feel optimistic about the possibility in the future for the youth to take the stern in political organizing and change in their countries?

Nalina: The people who make the decisions affecting our lives are the people in power. I always tell those who only want to be involved with NGOs and don’t want to get involved with politics, that we find ourselves in this situation right now because of people in power deciding on important matters. If you’re not going to take their place and their power, we’ll just allow them to make decisions again and again. So, we have to take power, and there’s nothing wrong to be in power, so long as you do good with that power and you don’t hold it too long.

Shamah: We really have to maximize the coalitions we’re in right now. The struggle for power is important for us social democrats to bring the changes and services to the people. Change may not be imminent in the immediate years but I remain optimistic for the long term.

Nalina: At least now that we have established these connections with each other in person at this training, when there is a need we will stand in solidarity with our comrades.

Do you think this kind of get-togethers with young political activists are useful?

Nalina: I think it’s a very good initiative and I like the fact that were not just talking to people from the ASEAN but also to people from Europe. As much as we want to make decisions for ourselves as ASEANs, we also have a lot to learn from the experiences of other regions. And it works both ways. The best thing about this is that a lot of the speakers are young people. So there’s no divide.

Shamah: I like the story that the program is telling us. We have to start with our skills and our minds. We started with facilitation skills and then moved onto ideology. The course is saying that we start with ourselves and then other topics, such as issues around the ASEAN. I’m planning to do this kind of training in our local areas.

And, lastly, what is the change you hope for in your own country?

Nalina: What I hope for our country ―I’ll get straight to the point about this even if it’s undiplomatic― is to hopefully replace the Barisan Nasional government, which in a way, is supposed to be a natural course of a working democracy.

Rackchart: My hope is really to have democracy in Thailand. We’ve been fighting for it for 80 years. I hope we bring back the ideals of the revolution and give democracy back to the people.

Shamah: My hope for the Philippines is for the young activists to grow in number and create the progress and change we want to see.