Singapore ― In a guest contribution for FES on World Day of Social Justice, ITUC General Secretary calls for decent work in supply chains in Asia. 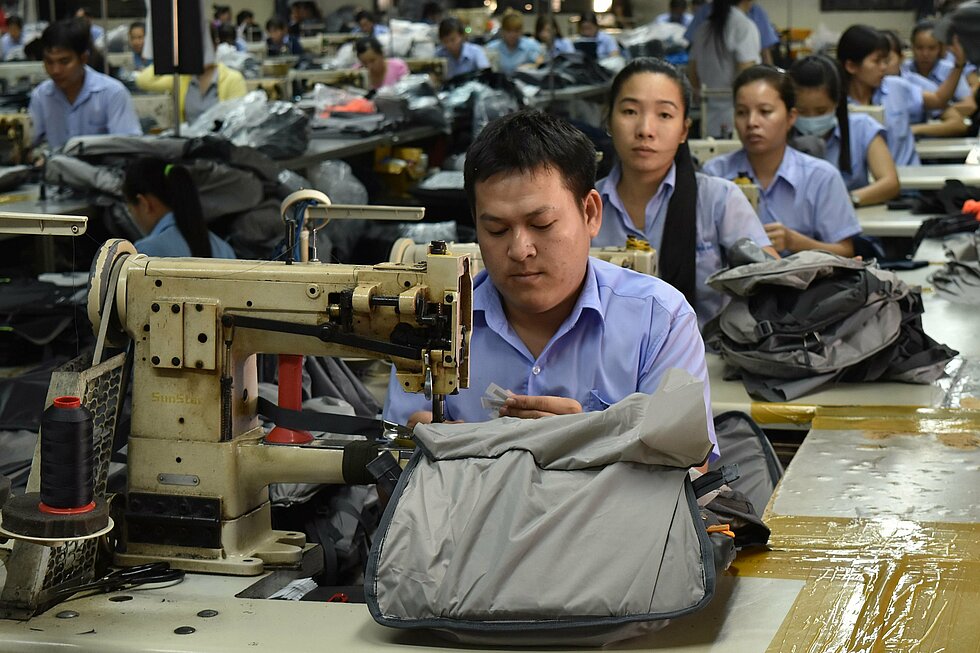 Supply chains that span several countries now dominate trade, accounting for 80% of value and 60% of volume. But for workers across Asia and their families the model is broken, by any indicator of decent work, equality or social justice.

The global workforce is in trouble.

Around 60 per cent of workers in Asia are in the formaleconomy. But more than half of these are in precarious employment, with short-term contracts and often unsafe work. Meanwhile, as many as 40 per cent of our brothers and sisters struggle to survive in the informal economy. This is the sector of desperation with no rights, no minimum wages, no access to the rule of law and too often no social protection.

And now informal work and even workers in modern slavery or forced labour can be found in the global supply chains of corporations across the world, including Asia, across all industry sectors. Corporate greed trumps morality and the rule of law in this model of global trade.

Rina sews for Victoria’s Secret in the Philippines. She is frightened for her 12-year-old son because she is forced to do overtime with no notice and many nights she can’t get home to cook him a meal or see him before he goes to bed. That is not decent work.

Fermie was a skilled technician for Samsung in the Philippines. Worried sick every week about whether he can afford baby formula, which costs one day’s wage he joined a union to argue for a wage rise and was sacked. Without freedom of association there can be no decent work.

Examples of exploitation can be found in countries right across Asia. Workers in Indonesia are arrested for demonstrating for a minimum wage. Likewise, in Cambodia where unions are now even prevented from formally advocating a wage rate for a minimum wage on which people can live with dignity.

ITUC research shows that inside the supply chains of 50 of our largest companies in Asia, up to 94 per cent of workers make up a hidden workforce; a workforce multinational corporations are dependent on for profit but with whom they have no employment relationship.

Chief executives know that the model most often denies freedom of association, pays poverty wages, and is predicated on hazardous, precarious or insecure work. But few take responsibility for the due diligence mandated by the UN Guiding Principles on Business and Human Rights.

Few governments implement ILO standards in countries where supply chains dominate the economy and labour market, and there is no effective rule of law to hold companies to account across borders.

Even fewer governments collect or allocate enough tax dollars to guarantee universal social protection, with the ILO clearly detailing that more than 63% of the world population have no or inadequate support.

There is no effective rule of law to hold companies to account across borders.

This model is broken and we say “enough.” We demand an ILO Convention on supply chains, and we demand that governments legislate to mandate due diligence across borders for their own multinationals.

We simply demand the rule of law

When major companies like Samsung are effectively lawless, corporate greed is more powerful than the rule of law. Korean workers, their rights under vicious attack by their own government, can tell you the truth about Samsung. Workers in Indonesia, the Philippines, and many other nations can tell you of bullying, union busting and risk of injury and life itself from chemical used in production.

Apple fares little better on an assessment of decent work. Apple makes 17,000 USD profit annually from each worker in their supply chain. A wage increase of 50 USD per month to see a minimum living wage in Asia would cost just 600 USD of that profit.

Decent work is a matter of political will

G20 leaders can turn this injustice around. They can:

Decent work requires universal social protection, a minimum living wage, freedom of association and collective bargaining rights, workplace safety standards and the rule of law to ensure compliance. The resources exist to achieve this – it’s just a matter of political will.

Social Justice – let’s begin with decent work in our supply chains in Asia.

The views expressed in this article are not necessarily those of Friedrich-Ebert-Stiftung.