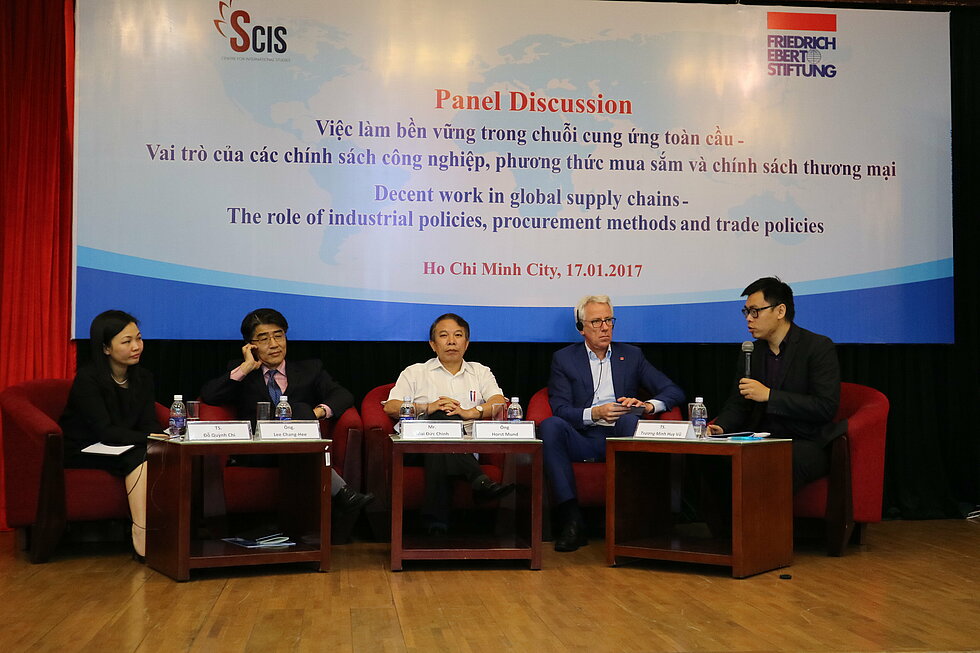 Photo: Panel Discussion in Ho Chi Minh City Experts discuss the findings of CLS+ country study for Vietnam and steps to improve the situation of workers in global supply chains, 17 January 2017 by FES 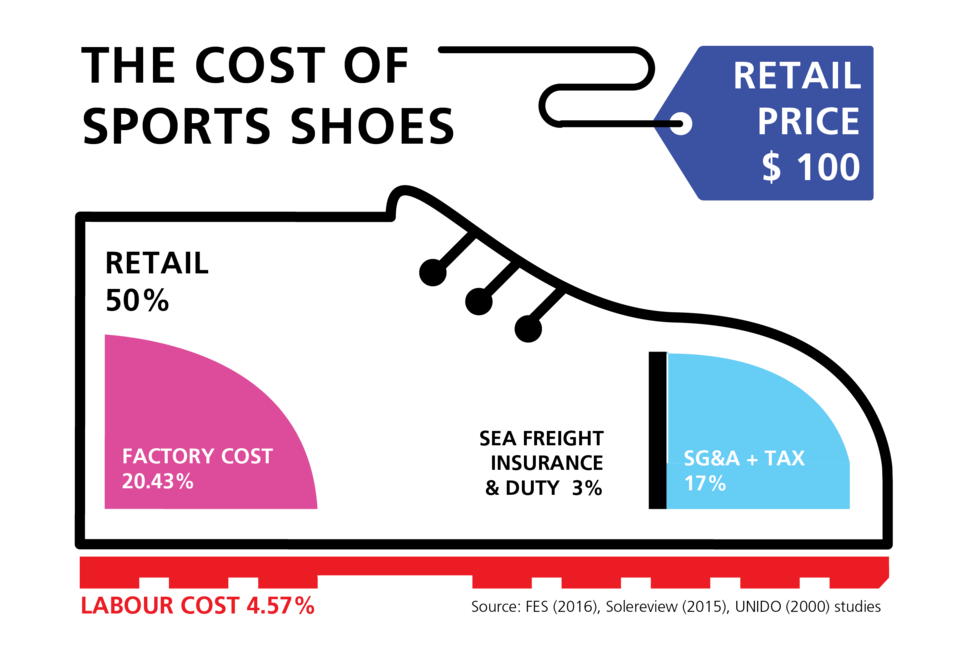 Graphic: The cost of sports shoes, where SG&A stands for Selling, General and Administrative Expenses, by FES 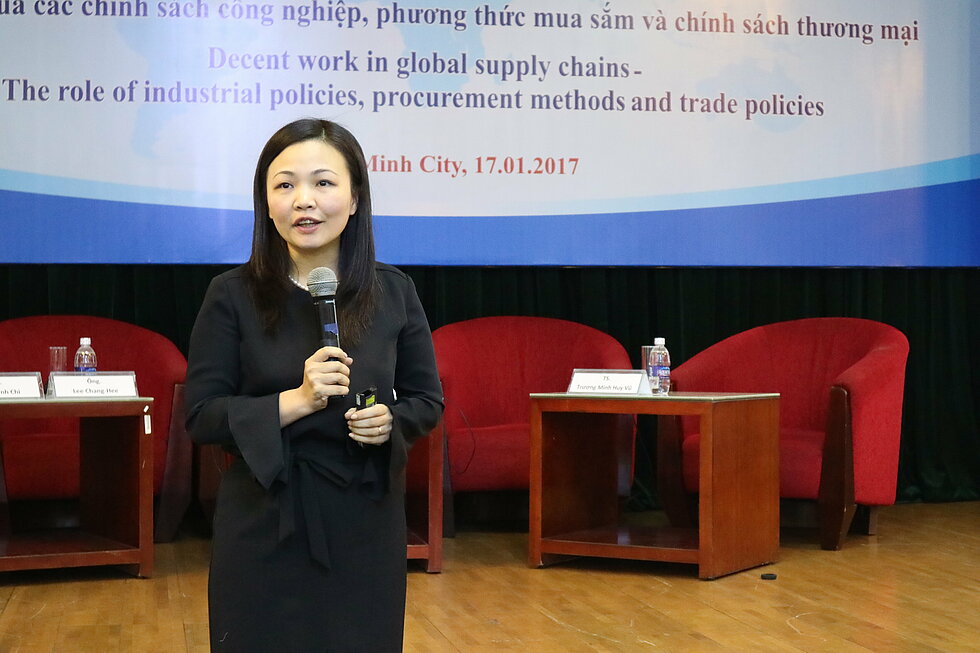 Photo: Dr. Do Quynh Chi presents the findings of her study in front of more than 80 experts from Vietnam and Europe, 17 January 2017 by FES 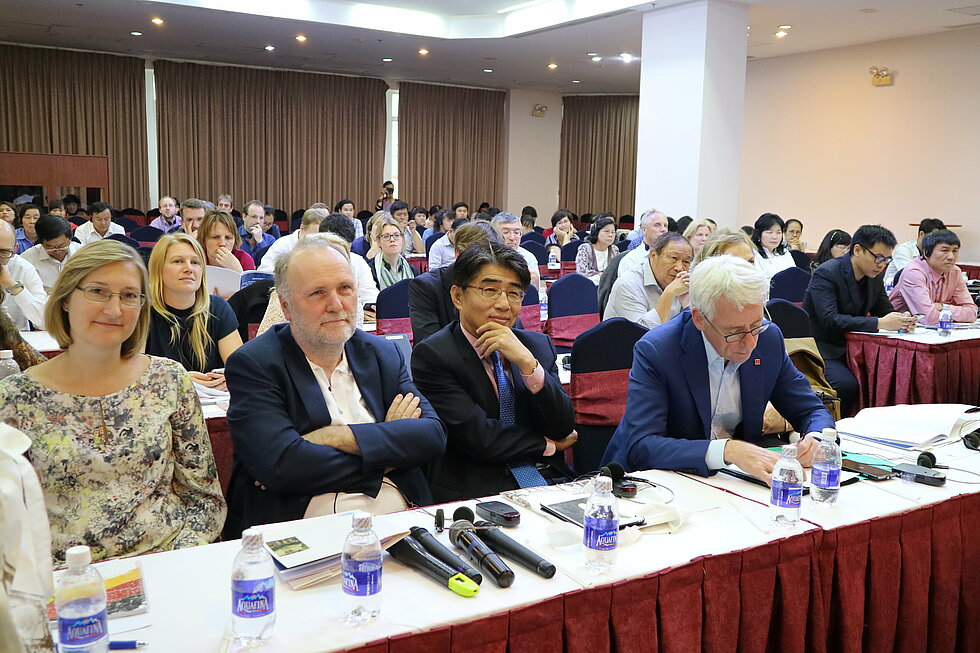 Suppliers in the garment, footwear and electronics sectors in Vietnam habitually disregard labour standards. This is one of the findings of a new study by Dr. Do Quynh Chi, Director of the Research Centre for Employment Relations, supported by Friedrich-Ebert-Foundation Vietnam Office.

An important reason for this neglect of labour standards is a downward pressure on purchasing prices at the lower end of the supply chain. Multinational brands and vendors dictate purchasing prices and with prices flatlining or falling in the past five years, suppliers are under increasing pressure to cut costs and lower labour standards. At the same time, returns for the brands are high, with profit margins ranging from 9% in footwear and up to 60% in mobile phone production.

The study also shows that voluntary commitments in the form of Corporate Social Responsibility (CSR) are not enough, as brands’ CSR and procurement policies are seldom aligned – exposing the inherent conflict of a low-cost business model and effective CSR policy.

International brands, mainly from Europe and the US, dictate purchasing prices, often too low to pay decent wages and invest in safe buildings — Erwin Schweisshelm (FES)

“We observed that it is just too simple to only blame the suppliers, both foreign invested or local companies for exploiting their workers, even though some of them clearly do so,” emphasized Erwin Schweisshelm, Resident Director of FES Vietnam Office, which commissioned the study. “Instead, many of the suppliers also here in Vietnam are ‘sandwiched’ between the price pressure from the big brands on the one hand and the need for compliance with national labour laws on the other hand. The international brands mainly from Europe and the US dictate the purchasing prices, which often are too low to pay decent wages and invest in safe buildings.”

To make things worse, foreign direct investments are often subject to beneficial treatment by authorities, such as tax breaks ― a response prompted by harsh competition between countries and regions to attract foreign investment. Under these conditions, domestic suppliers, which generally perform better in terms of observing labour standards, find themselves at a disadvantage, thus tipping the scale even further towards deteriorating working conditions.

To change these asymmetric power relations between buyers and suppliers, high-ranking experts from Viet

In a call to action, Mr. Horst Mund, Head of the German Metal Workers Union (IG Metall) (link in German) with 2.3 million members in Germany, urged governments to regulate global supply chains, so that decent work can be guaranteed. Despite their bad reputation among the public in Europe for fears of deregulation, Free Trade Agreements (FTA) are a practical and ever more relevant way to bolster labour standards in global supply chains – when the provisions are made binding and enforceable.

To this end, FES has initiated Core Labour Standards Plus (CLS+), a project in Bangladesh, Cambodia, Pakistan and Vietnam that promotes the inclusion of an enhanced set of Core Labour Standards as binding and enforceable elements in trade agreements. Based on four country studies, FES will make clear policy recommendations to lawmakers in the EU from mid-2017, to make sure that the planned FTA between Europe and Vietnam becomes a best practice example for a new generation of FTAs.

Read more on the key findings of the Vietnam country study in this executive summary. The full study by Dr. Do Quynh Chi will be published on this website in February 2017.

Click here to learn more about the project CLS+ and the work by Friedrich-Ebert-Stiftung on a socially responsible trade regime for the 21st century, or watch our video to see why this topic is so important.