Bangkok (Thailand) ― Historically, tram workers were the first to form a union in Thailand, where today workers share a global challenge, achieving decent work for all in times of digitization 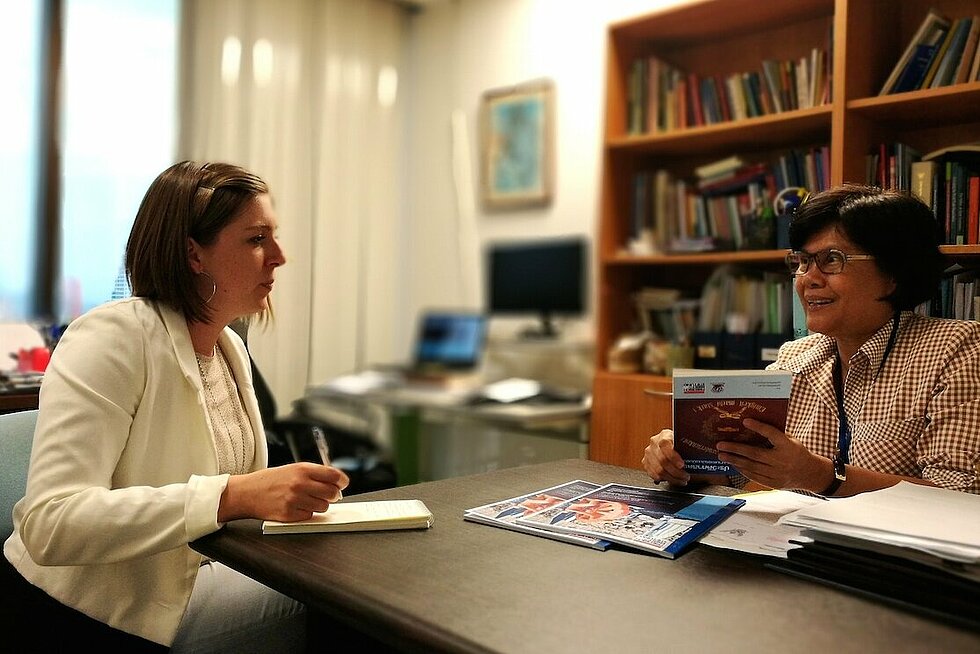 Nobody can seriously object to the International Labour Organization’s demand for “Decent work for all,” but it seems to remain a major challenge in many countries. May 1 is therefore a day to not only give credit to the labour movement, but also to go on marches and demand labour rights. That’s why we took a minute to recap the exhibition on Thai and German labour rights, held from September 6-11, 2016, which shed light on the development of the movement in both countries. Preeda Sirisawat, Program Officer at Friedrich-Ebert-Stiftung Thailand (FES), was among the initiators of the exhibition.

Alina Zurmuehlen, intern at FES Thailand, talked to her about the exhibition and the current work of FES in the country.

Last September, FES organized a five-day exhibition at Bangkok Arts and Cultural Center about German and Thai labour union history. How did the idea of this exhibition come into existence?

Preeda Sirisawat: FES has been working on fostering an active labour movement since the 1970s. However, over the years we found out that the awareness of the historic development of the movement was low. But how can a movement and unions work with determination if they do not know their history? That’s why we came up with the idea of giving a voice to the history of the movement in Thailand. As the labour movement has a very different history in Germany, we thought it might be worthwhile to compare both developments and bridge the global gap. Next to the exhibition, we organized public seminars on labour-related topics such as workers in the media and Thailand’s current challenges such as informal workers, migrant workers, and the impact of automation on employment.

How did the labour movement and trade union formation develop in Thailand?

PS: As a single question, this is really hard to answer because there were just so many historic events. In Thailand, the labour movement developed out of a system of bonded labour. Only with the change from absolute to constitutional monarchy was this altered. Workers who had spent much of their labour resources in the construction of various infrastructure under the reforms of King Rama V began to have a voice and were permitted to establish their own organizations.

What many people do not know, is the fact that Thailand had its own tram in Bangkok during those days, and that the tram workers were the first to unite in a labour organization. Nevertheless, World War II and the following coups d’état did not provide space for oppressed workers’ associations in Thailand. This only changed again, after the Thai popular uprising in 1973.

The state system has always affected the unions. They were stronger under democratic administrations and weaker under authoritarian rule. Without freedom of expression, it is difficult for unions to unite and fight for their rights. The 1991 dictatorship, for instance, split the power of labour by destroying state enterprise unions and dividing public and private sector workers.

When did FES Thailand start to get involved with the promotion of labour rights? And what strategies can the foundation follow to achieve workers’ empowerment?

PS: Well, of course this is an ongoing activity. FES is working on labour rights and workers’ empowerment on two levels: capacity building for workers and multi-stakeholders’ dialogue. We usually provide education and training for relevant stakeholders. Together with our partners, we build up capacity for the independent actions of these stakeholders and we also generate studies, including policy recommendations, on pressing issues for regional and national players.

What activities will FES Thailand implement in 2017 to bring the importance of fair work into the spotlight, then?

PS: We have planned a variety of things. Union density in Thailand is very low, especially in the peripheral provinces, so we are raising awareness of what workers can do to bring forward their interests and demands. We are establishing a forum in a province in the North, for example, where a network of workers, academics, NGOs, community leaders and further actors is set up to function as a mediator.

A further pressing issue in the field of work in general is employment security, especially when taking into account the impact of digitization, automation, ageing society, climate change and adaptation. We will conduct a study on this soon, too, and organize a forum later on.

You already hinted at Thailand’s economic and social development and what is known as Thailand 4.0, an updated version of the Thai economy that can compete on the international market. Which issues will change according to this vision? And what are related challenges for workers and the labour market?

PS: In order to push our economic development and to escape the middle-income trap, Thailand is currently trying to increase workers’ skills, provide quality education for its citizens, and stimulate innovation potential, among other things.

What we need to be aware of though, is that challenges arise from these plans as well, even though economic reforms might be desirable. How can we protect workers, for example, that have difficulties digitizing their labour skills? How can we provide employment security in times of automation? And one of the most pressing issues: How can we provide social security to all workers, both in the formal and informal sector?

Of course, basic social protection exists, but it is not accessible to all realms of work and not encompassing enough to thoroughly protect citizens from illness, unemployment or old-age poverty, for example.

What does the Thai labour movement need to look like then after 2017?

PS: In order to achieve decent work for all in times of digitization, the Thai labour movement has to work closely with other social coalitions and try to take part in policy-making processes. Making a just transition become reality is the keyword here. ###

Alina Zurmuehlen is an intern at FES Thailand. For more information on the work by Friedrich-Ebert-Office in Thailand contact Stine Klapper, resident representative of FES Thailand at info(at)fes-thailand.org.