A state-of-the-art, ready to use blueprint for decision-makers.

For more information about the regional work of FES on trade, labour and social dialogue contact the FES Office for Regional Cooperation in Asia and follow us on Twitteror Facebook for regular updates. 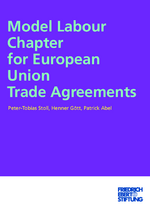