“Unless targeted measures are taken, women will suffer from gendered inequalities limiting their ability to take full advantage of the opportunities created by the economic integration in ASEAN.” 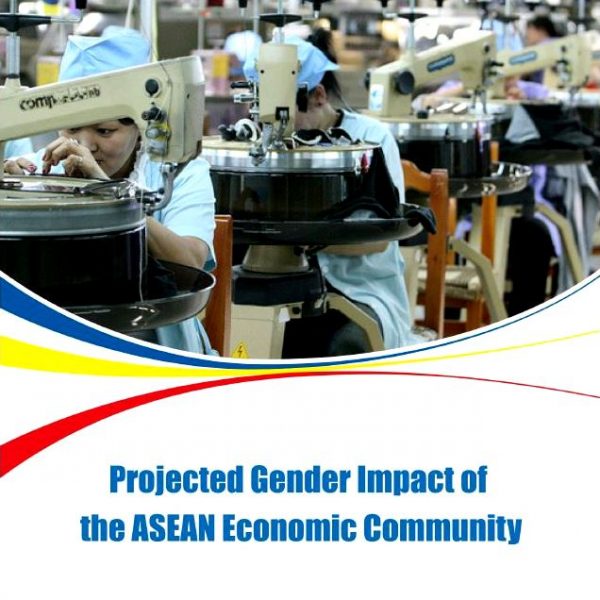 This is the key message of the study “Projected Gender Impact of the ASEAN Economic Community” – a joint publication by the Friedrich-Ebert- Stiftung, UN Women, the Association of Southeast Asian Nations (ASEAN) Secretariat and the Australian Government. The study was commissioned to better understand the linkages between economic integration and gender inequalities in the ASEAN region.

The ASEAN Economic Community (AEC), that came into effect in December 2015, set the foundations of a single market and production base allowing for the free movement of goods, services, investment, capital and skilled labour across the ten ASEAN member states. However, wide disparities in the participation of women in the labour force will prevent them from taking advantage of the opportunities created by the AEC or other positive shocks to the job market.

Women’s limited participation in the ASEAN Economic Community weakens the labour market. Despite potentially vast numbers of skilled and unskilled female workers, women do not have sufficient access to the labour markets and their various professions and sectors in the ASEAN countries. Economies pay a price for keeping women out. They grow and develop slower, as data recurrently suggests — Adrienne Woltersdorf, FES Office for Regional Cooperation in Asia (Singapore)

The study “Projected Gender Impact” uses a comprehensive analysis of trade and labour market indicators to show that the increased integration in trade, cross-country investment and skilled labour is unlikely to have a material impact on the lives of a vast majority of women in ASEAN countries. While the impact of the AEC on women may be significant in terms of the volume of jobs created, it will be small in terms of changing the gender patterns of employment and wages.

The report highlights the necessity for immediate targeted interventions to ensure that the benefits from the AEC or any other economic integration process can be shared by women. Supply and demand side policy interventions are proposed to increase women’s share in paid employment and in their wage levels. These include investments in women’s technical training, fiscal incentives for firms to hire women, and greater monitoring of gender commitments at the regional and national levels.

As this report focuses more on the cross border movement of goods and services, and not necessarily on the movement of people, FES together with UN Women and ASEAN will follow-up on the particular recommendation of the study to conduct a standalone research on women migrant workers who form a large part of workers in many of the export industries.

For further inquiries about the study email the Community Relations Division of the ASEAN Secretariat: public(at)asean.org.