Himachal Pradesh (India)—A short documentary by FES raises awareness about the hardships of women and the families of migrant workers in India.

Migration of men for work is a universal phenomenon, and the issues arising out of this are common knowledge. What is less known are the severe financial, physical and social hardships faced by the women and families of migrant workers.

To capture these unheard stories, Friedrich-Ebert-Stiftung India Office recently produced “Unseen Shadows,” a short documentary about the life of women and the families of migrant workers in Changar region, northern India. Part of a global series about people on the move that is supported by the online portal of FES on migration (link in German), “Unseen shadows” illustrates the movement by people from women’s perspective.

So how do women experience migration without relocating themselves? How do they cope with the emotional vacuum left behind by their fathers, brothers, husbands, sons? Having assumed the role of household heads, are they elevated to the status of a man in the society? Is it empowering in the long term, or are these roles temporary? What kind of social and policy support is required to improve their lives? “Unseen shadows” addresses some of these questions, documenting an excerpt in the life of Changar’s women.

The barren lands of Changar

Over the years, effects of climate change and weather extremes have exacerbated living condition in the Changar region, a geographically arid part of India. A considerable decline in agricultural production linked to changes in climate has limited access to crops and food for the local population.

As a consequence, the region has witnessed employment-related mass migration. It is almost always men who migrate, as movement of women is restricted given the strong patriarchal social order. According to the latest Economic Survey (January 2017), between 2011 and 2016, close to 9 million people migrated between states annually. Of those, most migrated for marriage, and only 10 per cent for work. However, this translates to 900,000 people migrating for economic reasons. It also means that an equivalent number of families are left to live by themselves.

“It is very difficult to run the household,” says Saaro, a woman from a migrant worker’s family. Her son stays away from home for at least eight months every year. “We have taken loan from banks and friends, that needs to be repaid. My father went away, then the husband, and now the son is also gone. It has become a generational phenomenon.”

The labour contractors pre-pay salaries, making it impossible for a worker to break out of this cruel form of modern day slavery. Seeking loan from money lenders or banks is the only option left when the salaries are exhausted. The cycle of debts leaves them high and dry for life.

These circumstances force women to take up odd jobs like working as domestic help, manual labourers under local employment programme MNREGA,* or collecting leaves from the forest for making pattal plates.** The transition from homemaker to worker seems empowering at first, with own income and control over spending. However, not only is it physically taxing as it increases drudgery, it also impacts the household dynamics, where by a woman finds herself pitted against the archetypical male earner.

In conversations, women of Changar shared that for the most part of their lives, they felt a void for a guardian or a companion. The long-term absence of male members bears heavily on the rest of the family’s psychological health, and can instigate fear and anxiety of abandonment amongst younger women and children.

“There is an increase in the burden on women because all family members tend to rely on women for all kind of work,” says Mr. Pradeep Sharma, Director of Society for Environment and Rural Awakening (ERA), an non-profit organization working with women self-help groups in Changar region. “If the male head of household is not around, then subsidies and benefits for government programmes will not be given by village council.”

In the prevalent socio-cultural environment, where stepping out of home is considered a big deal for women, negotiating with government officials to claim benefits is a relentless struggle. Information poverty is another challenge as women are unaware of their rights.

There is a growing discourse among policy-makers and NGOs around providing adequate support services for migrant workers worldwide, but none for their families.

As a start, ongoing livelihood planning, carried out by the Indian government, especially in areas prone to weather extremes, needs to identify and offer livelihood options which are economically and environmentally sustainable. This would also help to retain workers, filling in the emotional void at least for the current younger generation.

More importantly, the process of claiming benefits could be made women-friendly by remodelling rigid administrative procedures and creating social and policy-oriented support systems that provide stronger safety nets. At present, women cannot claim benefits because the required documents to claim benefits are not in their name. 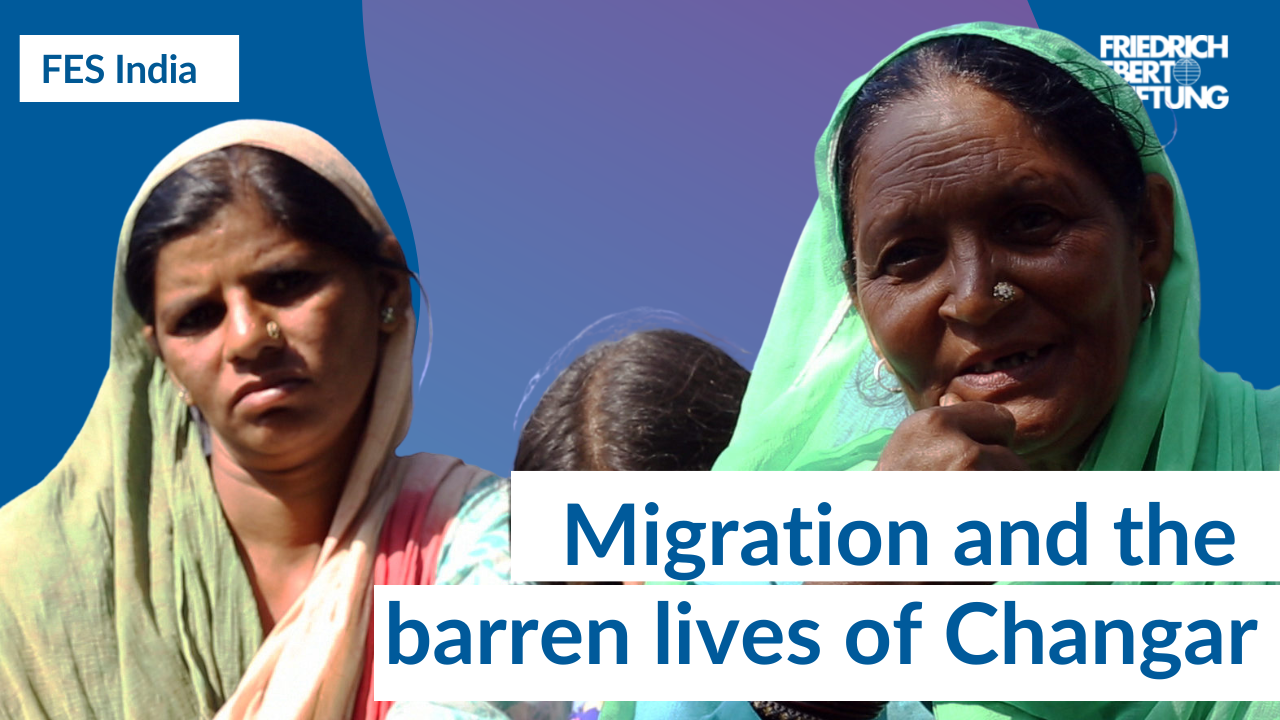 *MNREGA – The Mahatama Gandhi National Rural Employment Guarantee Act aims at enhancing livelihood security of people in rural areas by guaranteeing hundred days of wage-employment in a financial year to a rural household whose adult members volunteer to do unskilled manual work.