Dhaka (Bangladesh) – The majority of women in Bangladesh still bear the double burden of paid work and unpaid care work. 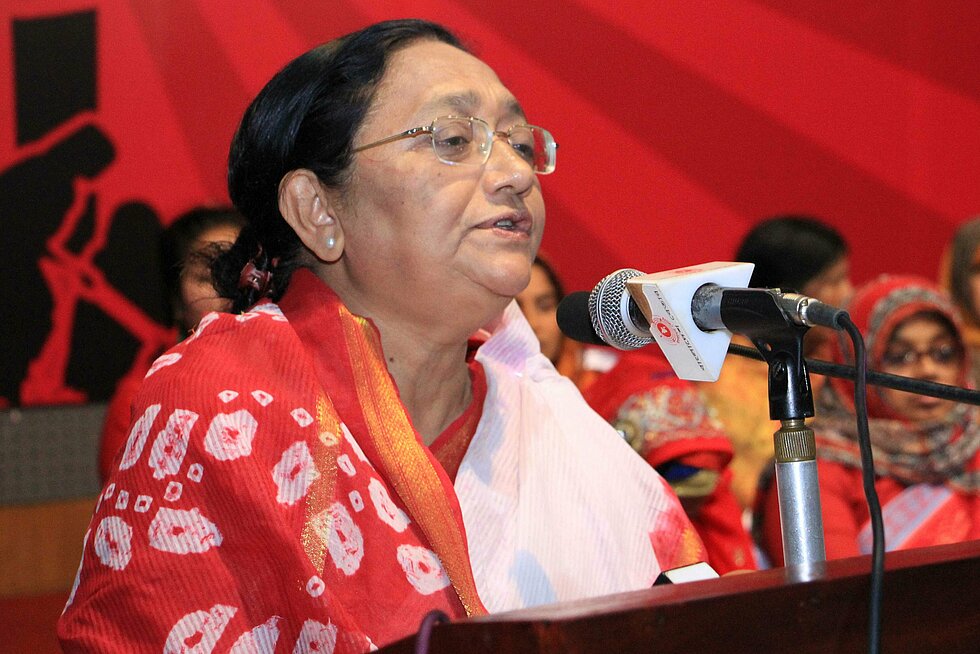 On the occasion of International Women’s Day, Afsana Tazreen and Arunduty Rani of FES Bangladesh led an interview with Shirin Akhter, member of the Parliament in Bangladesh since 2014. General Secretary of Jatiya Samajtantrik Dal (Socialist Party) and President of the National Workers’ Alliance, Shirin Akhter is also the founder President of Karmojibi Nari (KN), an organization established in 1991 and dedicated to the equality and dignity of working women. In partnership with FES Bangladesh, Shirin Akhter recently formed a platform that brings together various actors from the women’s rights movement.

Read more in this interview on the joint work with FES towards gender equality and social justice and the role of women in Bangladesh.

FES: Traditionally and for decades now, women in Bangladesh have been primarily responsible for household care work. Has the situation changed over the last years? If so, how?

Shirin Akhter: Historically, women have been involved in care work not only in Bangladesh but all over the world. It began since the inception of agro-based society and grew with marriage, which is deemed as universal for women for economic and social security. Around 66 percent of women are married by the time they are 16.

Furthermore, there has been a tendency in the traditional patriarchal societies, in the past and today, to deny recognition of women’s contribution to their families. We often hear in our society: “She does not do anything”. Often ideas around gender division of labour remain resistant to change. Our societies need to understand that women are still primarily responsible for undertaking unpaid care work in the family and the community which leads to women having longer workdays and less time for leisure. Not only is she responsible for the unpaid care work but the woman is often engaged in paid work, as well, thus bearing a double burden, unlike her male counterpart.

Women have come a long way since then but the so-called “state of imprisonment” has still remained unchanged, globally

Society in general, and its male members should know that women are saving them a lot of money by performing the tasks at home, for which she is not receiving and often not even expecting a monetary payment. However, the world has made considerable progress and women have come a long way since then but the so-called “state of imprisonment” has still remained unchanged, globally. Women are confined by their own labour. Therefore, we started a women’s rights organization called the Karmajibi Nari (KN) 25 years ago, which includes women from all spheres of the society and carries the slogan: “All women are working women.”

What is Karmajibi Nari (KN) and what does it do? What is the goal of the recently launched platform?

SA: Karmojibi Nari was created on May 1, 1991 with an aim to achieve the rights and dignity of women. Over the years KN organized formal and informal sectors’ workers, especially female workers, strengthened their leadership capacity and advocated with concerned authorities to harmonize the existing regulations, as well as to amend and enact legislation for the well-being of the workers. Since 1996, KN activates female workers of RMG sector and started organizing workers in the formal and informal sectors. KN also provides legal support to the workers in resolving workplace conflicts.

Recently, in partnership with Friedrich-Ebert-Stiftung Bangladesh Office, we formed a platform consisting of eighty workers’ federations. The women’s rights platform is called “Nari Sramik Kantha” (Voice of the Women Workers) which brings together various women’s rights organizations and trade unionists, from the formal and informal sectors. Both KN and FES are working towards ensuring social justice.

The road to women’s empowerment in Bangladesh has been focused, above others, on women’s participation in paid work and this is reflected in both policies and research. There has been an increase in female labour force participation in Bangladesh, especially in the Ready-Made Garment industry where women comprise 80% of the workforce. How is unpaid and paid care work organized with regards to gender?

SA: Women have become more conscious nowadays. However, most women in Bangladesh are still bearing the double burden of paid work and unpaid care work. There are various estimations but we often hear that women spend 6 times more hours on unpaid care work each day, in spite of being involved in paid work.

What we see more often is that women are asking for recognition for their paid and unpaid work, both from the society and from the government. Moreover, they also want to know the worth of their unpaid care work in monetary terms.

Women are asking for recognition for their paid and unpaid work, both from the society and from the government

There is a gradual change in the gender dynamics in the society. Men have also started contributing to care work, though the practice is becoming more common in urban cities than in the rural areas. Therefore, men can also raise the question of pinning a value on the care work done by them, which is the gender-friendly approach to address care work.

Bangladesh is among the world’s ten fastest growing economies. According to World Bank, the country’s GDP is projected to grow by 6.6 per cent this year. How is unpaid care work contributing to the country’s economic growth and Bangladesh’s goal and supporting it to be a mid-income country by the year 2021?

SA: Bangladesh has reached the status of a so-called lower-middle income country since 2015 and is now on its way to become a middle-income country. We are speeding ahead in terms of food production, nutrition, education, women’s empowerment. Keeping all these goals in consideration we can definitely reach the goal to be a middle-income country by 2021. However, we will need to focus on a more diverse economy as currently, Bangladesh relies heavily on its Ready-made Garment (RMG) Industry. Of its total exports, RMG comprises 82 per cent and brings in 28 billion USD annually.

Given these circumstances, it is very important to recognize and value unpaid care work on the one hand, but also to understand how women can be more involved in our labour market. Not only will it boost the economy with women adding up to the workforce but will also empower them.

Personally, I believe that although we would reach the status of a middle-income country in terms of numbers, we need to focus on various other factors and more pressing issues. The goal of a middle-income country can be truly reached when workers, in spite of their gender, work for decent wages in a decent environment. Women, who make up approximately seventy per cent of the RMG workforce, still earn one of the lowest minimum wages, in the world. Women are also highly involved in the informal sector and find themselves in worse situations because informal sector workers have even less rights than formal sector workers and their voices are often unheard.

What are the required policies for a more gender-balanced society?

SA: Bangladesh can be a role model in the eyes of the entire world. Our success with regards to the implementation of the MDGs has shown this. The government is working to eradicate discrimination from all spheres of the society, especially in terms of gender discrimination and ensuring equal pay and equal opportunities at the workplace.

The government has created several other policies to minimize discrimination, such as agricultural policies, labour policies, policies for fair administration. What is more important now is the successful implementation of those policies, which we are now looking forward to.

Moreover, we need to ensure that women receive more support to combine care work and paid work, by creating structures that support families in their daily care-work and by implementing additional incentives geared towards equal sharing of the double burden. For instance, this would mean better child care centers for RMG industry workers.

Adapted for format and style, the text first appeared on the new thematic portal by FES on care work. The views expressed in this interview are not necessarily those of the Friedrich-Ebert-Stiftung.