Do Quynh Chi (left) researcher and author of the Vietnam country study, attending a CLS+ project workshop with other lead researchers and participants, Phnom Penh, 31 March 2017, by FES / Mila Shopova

Workers in export-oriented sectors in developing countries do not get their fair share of the wealth created in global value chains, according to a new publication from Friedrich-Ebert-Stiftung.

The report “Who benefits from trade? – Findings on the link between trade and labour standards in the garment, footwear and electronics industries in Bangladesh, Cambodia, Pakistan, and Vietnam”, shows that the race to the bottom in terms of workers’ rights is well under way in Asia. The publication's four case studies were conducted by lead researchers Jakir Hossein, Veasna Nuon, Muhammad Asif Iqbal and Do Quynh Chi, and assert that serious violations of the International Labour Organization (ILO) labour standards are frequent.

The studies report on ample evidence that workers are prevented from organising and bargaining collectively, in Export Processing Zones as well as outside these areas. Child labour remains high—with 20 to 40 per cent of workers in the leather and footwear industry in Bangladesh, for example, estimated to be under the age of 18. The authors of the case study on Cambodia report of an increase in the number of cases of child labour. Despite the Rana Plaza disaster in 2013—in which more than 1,100 people, mostly garment workers, died when an eight-storey building collapsed in Dhaka—safety standards are frequently ignored, as are risks to workers’ health. Forced overtime is also common—in Vietnam, workers face forced overtime of up to 100 hours per month. In general, not only do workers not receive a living wage, but in many cases unless in a management position, they are paid less than the legal minimum—a situation which affects 87 per cent of women workers in Pakistan's garment industry.

Although Pakistan is a beneficiary of the European Union's Generalised System of Preferences Plus (EU GSP+) arrangement, little progress has been made with regard to the enforcement of labour standards. The case studies show that references to labour standards in trade agreements and different systems of generalised trade preferences have had a very limited impact on working conditions.

"Many value chains are characterised by an unbalanced power relationship, in which large corporations can exploit their dominant position"

“The downward pressure on working conditions can partly be explained by the organisation of production processes in global value chains,” says Veronica Nilsson of the FES Office for Regional Cooperation in Asia, which released the publication. “Eighty per cent of world trade takes place through these chains,” she says. "Many value chains are characterised by an unbalanced power relationship, in which large corporations can exploit their dominant position.”

By organising production in this way, multinational corporations can outsource low-productivity and low-skill tasks to the countries offering the lowest price.

Typically, a few major global brands, such as mobile phone producers or fashion brands, set the price. Suppliers worldwide then compete for orders without any influence over the price. The purchasers effectively use their dominant position to squeeze labour costs, even though these constitute only a fraction of the retail price, and the minimal savings lead to breaches of labour standards. In the case of sport shoes, labour costs are less than 5 per cent of the retail price, according to the case study for Vietnam.

The publication is one output of the project Core Labour Standards Plus, which advocates for binding labour standards in trade and global value chains

“With this publication, FES wishes to draw attention to the poor working conditions in global supply chains and the link between trade and labour, and to contribute to finding solutions to these challenges,” says Adrienne Woltersdorf, Director of the Office for Regional cooperation in Asia. It is one output of the project Core Labour Standards Plus, which advocates for binding labour standards in trade and global value chains, going beyond the core labour standards of the ILO.

The publication contains the executive summary of each case study together with a synopsis by Hansjörg Herr and Christoph Scherrer, and is accessible for free download. The full country studies will be made available on this website within the course of the year. ###

For more information on the regional project Core Labour Standards Plus, read the project's brochure or contact directly Veronica Nilsson, Programme Manager at FES Office for Regional Cooperation in Asia. 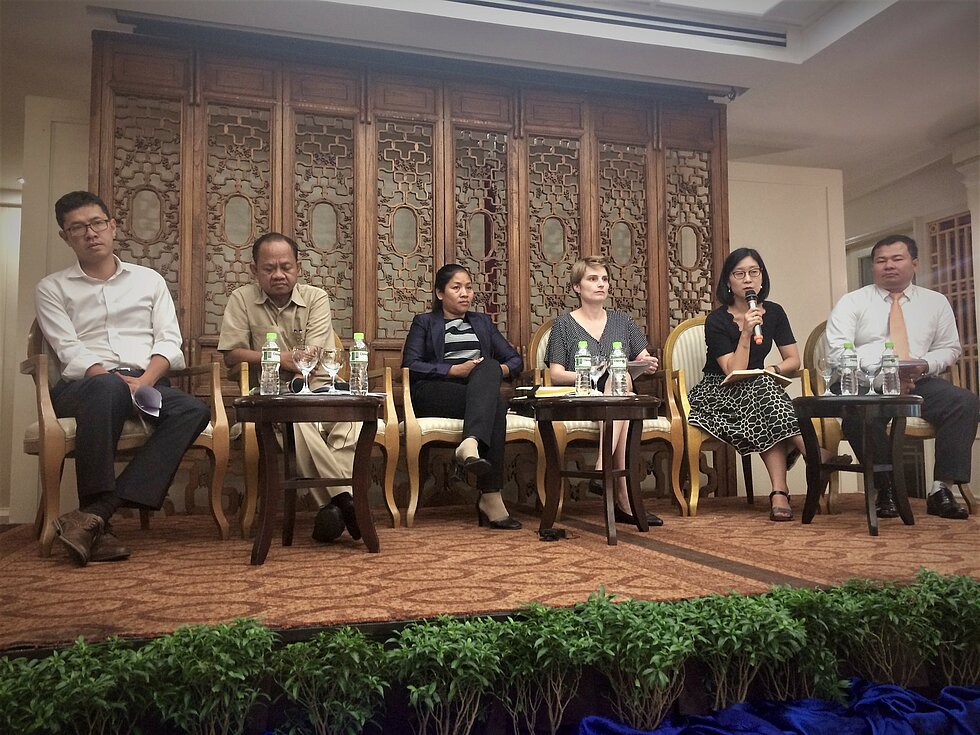