An analysis of the EU’s new take on trade, asking how the concept of open strategic autonomy should be understood, which policy areas are most likely to be affected by it, what obstacles may prevent achieving it, and what are the implications for transatlantic relations and for the future of EU-China relations.

For a number of years, the concept of “strategic autonomy” has been an established part in the discussion about the EU’s future orientation, until the Commission under President von der Leyen vowed to think and act as a “Geopolitical Commission.”

In the context of gradually increasing frictions between the US and China, the concept continues to appear even more attractive to position the EU between the two rivals and assert its interests towards them.

In the following piece, Dr Steven Blockmans, Director of Research at the Centre for European Policy Studies (CEPS) in Brussels and Professor of EU External Relations Law and Governance at the University of Amsterdam, analyzes the EU’s new trade strategy “An Open, Sustainable and Assertive Trade Policy” in its wider geopolitical and geoeconomic context.

The new trade strategy, the author concludes, materializes in the bloc’s support for multilateralism and the will to protect the international rules-based order, while making better use of the weight the EU enjoys in the international trading system. It aims to avoid a situation where Europe has to choose between relations with the US or China, but it still seeks a revitalized partnership with the US that is based on shared values, despite numerous disagreements between Washington and Brussels.

The paper illustrates how the EU with its strong mandate in trade policy is already involved into world politics and big power competition and how it is defining its role and interests within a rapidly changing strategic environment. 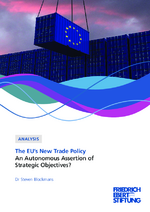