The FES Office for Regional Cooperation in Asia welcomes its new Director, Adrienne Woltersdorf. After almost four years, the previous Director Julia Mueller is leaving to continue work in the FES headquarters. 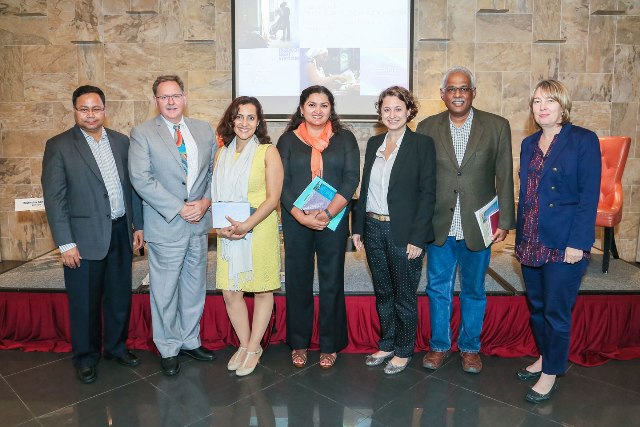 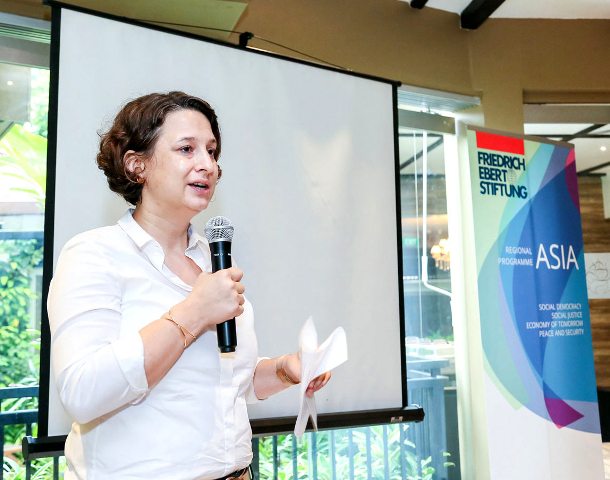 The handover reception was held in Singapore following a panel discussion and a workshop on the social dimension of the ASEAN economic integration with FES partners from the region – trade unionists, parliamentarians, researchers, members or civil society organisations and representatives from international and regional organisations. At the reception, Julia Mueller bid farewell to partners and colleagues:

It was a great privilege to work in Asia to identify with our partners policy responses for decent work and equal opportunities. Participation of civil society and trade unions at all levels of political decision-making is key to promoting social justice and solidarity. I am confident that this work, part of the promotion of social democratic values in Asia, moves in competent hands.”

Julia Mueller started working with FES in February 2008, taking over as Director of the Office for Regional Cooperation in Asia in 2012. She brought with her previous work experience on trade union cooperation, social justice, decent work and gender equality gained during her time as desk officer at FES Headquarters. Over the past four years, Julia positioned FES as a key facilitator for debates on aspects of social justice in Asia with a variety of stakeholders and pushed with partners on placing social and labor standards high-up in the political agenda of regional integration and inter-regional dialogue between Asia and Europe. The visibility of FES has grown in the region since and the foundation is now firmly embedded as a major partner and broker for dialogue on labor and social policies, gender equality and protection of migrant workers.

Before arriving in Singapore as the incoming director of the Office for Regional Cooperation in Asia, Adrienne Woltersdorf was senior desk officer for Afghanistan and Pakistan at the Friedrich-Ebert-Stiftung in Berlin. Until 2015 she was the foundation’s resident representative in Kabul, Afghanistan where for three years she managed the country’s program on promotion of democracy and organizing for social justice. Adrienne was the key person in establishing a regional network on peace and security, a unique project that brought together in dialogue high-ranking Afghan decision makers together with representatives from all of Afghanistan, neighbouring countries, including India, the republics in Central Asia and Iran. Prior to joining FES, Adrienne was a professional journalist for leading German media. As part of her impressive career track, she most recently served as the head of China programmes for Germany’s international broadcaster, Deutsche Welle. Prior to that she worked as the Washington-based correspondent for the German daily taz, after heading the newspaper’s Berlin department.

At the handover reception, the new Director Adrienne Woltersdorf greeted partners and colleagues:

I am excited about the work ahead in strengthening and expanding the impressive network of actors for social justice in the region which FES under Julia’s guidance was able to establish. My goal will be to further the dialogue between Europe and Asia on the common challenges of growing inequality, migration and economic competition in the age of globalization.”