Growing discontent with globalisation could turn into backlashes unless the EU brings its trade negotiations in line with its own human rights agenda and the needs of labour worldwide, warns economist and political scientist Christoph Scherrer

“Making trade work for workers” is the theme of a panel discussion to be held in Brussels on 28 June 2017, organized by Friedrich-Ebert-Stiftung (FES) in cooperation with Bernd Lange, chair of the Committee on International Trade of the European Parliament. Together with Trade Commissioner Cecilia Malmström, the panellists will explore how to strengthen the social dimension of trade.

On this occasion, FES will also launch the study “Conditional or Promotional Trade Agreements – Is Enforcement Possible?”, co-authored by Christoph Scherrer and Madelaine Moore, who is a PhD fellow at the International Center for Development and Decent Work, University of Kassel. The study analyses the enforcement of international labour standards through the inclusion of social clauses in trade agreements.

FES met with Christoph Scherrer, professor of globalisation and politics at the Kassel University in Germany, to discuss the findings of the study and the impact of trade on working conditions.

It is often argued that trade leads to higher growth and more jobs and helps pull people out of poverty. Yet the research carried out under the framework of a project by FES in Asia confirms that in fact a race to the bottom in terms of labour standards is taking place. How do you explain this?

Christoph Scherrer: The race to the bottom is not true for all industries. However, in industries such as the garment one, where market entry is rather easy because the skills needed are in ample supply and capital expenditures are low, the competitive pressure leads to continuously lower prices. Lower prices in turn put pressure on wages and working conditions.

“The person who ends up working for wages usually lacks an alternative to wage labour. Once the subsistence economy has been left, return is almost impossible”

One precondition for this dire situation is the structural oversupply of labour. Rapid population growth contributes to this oversupply. Even without population growth, labour power can be in oversupply. This is the case when industrial agriculture or world-class manufacturing meets subsistence agriculture or traditional industry. The displacement of the low-productivity subsistence agriculture or of inefficient industry can make workers redundant faster than the more productive market-oriented agriculture or modern manufacturing industry can absorb. This oversupply of labour power is exacerbated by impediments to market exit. The person who ends up working for wages usually lacks an alternative to wage labour. Once the subsistence economy has been left, return is almost impossible.

What in your view needs to be done for trade to benefit workers? Can workers in both developed and developing countries benefit from trade at the same time?

CS: For workers to be able to benefit from trade, wages have to be taken out of competition. Of course, given the enormous differences in productivity and living standards, there can be no one global minimum wage. But what should be possible is the adherence to the International Labour Organization (ILO) conventions; at minimum, the ILO core labour standards. In addition, one should strive for contextualized minimum wages, i.e. minimum wages that reflect the level of productivity and living standards in the respective regions.

According to the study you co-authored with Madelaine Moore, social clauses in trade agreements have not been very successful in protecting labour rights. Can you briefly explain why this is the case? Do you have any suggestions how to make social clauses more effective?

CS: The failure of social clauses in trade agreements has multiple causes. A key reason is that the policy communities in charge of negotiating and administering trade agreements are generally committed to liberalizing trade across borders. They consider labour rights as an obstacle to their task. Therefore, they include social clauses only for symbolic purposes. Within this policy community, business organizations are the dominant force. They want to retain access to cheap labour in the competition for market share and profits. The governments of the Global South are either beholden to these interests or believe that they can increase employment only by offering investors even a better deal than the neighbouring country. Some authoritarian governments also fear the political power of organized labour and therefore deny workers the right to organize.

"One cannot rely on the goodwill of the brands and the retailers. A wage floor has to be forced upon them. [...] The reason being is that they don’t want to be undercut by others"

More effective social clauses can be achieved only if labour and other progressive forces gain influence over the trade agenda, the trade negotiations and the trading regimes’ monitoring and dispute-settlement processes. In addition, more efforts are necessary to inform the economic development community about the benefits of wage floors for economic and social upgrading.

Case studies from Bangladesh, Cambodia, Pakistan, and Vietnam, part of a recent publication by FES, show that only a fraction of the retail prices for clothes and footwear goes into wages for the workers producing the goods. In many cases, workers are not paid even the minimum wage despite being so low that it cannot sustain decent living standards. Why don’t manufacturers simply increase their price to make sure that the workers earn decent wages?

CS: In general, the brand companies and the big retail chains squeeze the manufacturers. The purchasing departments exert great power over the manufacturers because the latter are in plentiful supply around the world. Of course, the brand companies and retailers could pay more. However, this would diminish their profit expectations. Lower profits might put them at a disadvantage vis-à-vis their competition. It might limit their ability to expand or even lead to a possible takeover by a competitor or private equity investors. Of course, some companies are more socially responsible in their corporate behaviour. But these companies are usually found in specific market niches such as eco-fashion garments. In other words, one cannot rely on the goodwill of the brands and the retailers. A wage floor has to be forced upon them. If a sufficient number of companies have to adhere to such a floor, they will start having a vested interest in having governments enforcing the wage floor also on the other companies. The reason being is that they don’t want to be undercut by others.

The European Union is an important export destination that allows preferential market access also for countries where labour standards continue to be crushed. If you would give one advice to Trade Commissioner Malmström on the issue of trade and labour, what would it be?

CS: If the trade Commissioner does not want to endanger the overall globalisation project, she has to make sure that the negotiation practices of the EU Commission's Directorate General for Trade are more in line with the human rights agenda of the European Union and the needs of labour worldwide. Otherwise discontent with globalisation will continue to grow and might lead to national backlashes. ###

Veronica Nilsson is Programme Manager at the FES Office for Regional Cooperation in Asia, based in Singapore.

Watch the debate at the European Parliament! Panellists, including Trade Commissioner Cecilia Malmström, explore how to strengthen the social… 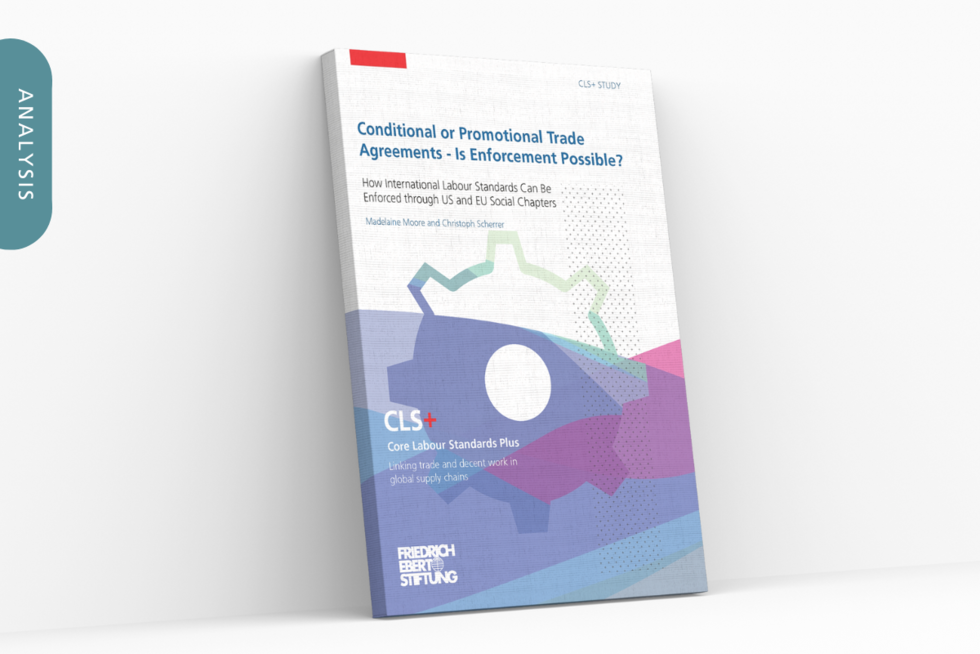 This publication examines social or labour chapters in trade agreements, explores the reasons for their ineffectiveness and provides policy…