Technological innovation is changing the way business is managed and how work is organized, raising concerns for workers in all ten ASEAN countries.

Automation, robotics and artificial intelligence coupled with the evolution of a platform-based economy, are changing the quantity and quality of jobs worldwide. Some studies see a threat to half of the jobs in the industrialized world, while others highlight the opportunities. The challenge is to manage these changes in a way that benefits all of society.

Social partners in the Association of Southeast Asian Nations (ASEAN) have an important role in shaping the necessary adjustments to face the challenges ahead.

Strengthening social partnership will therefore be crucial in the digital era, a key topic at the 9th ASEAN Regional Tripartite Social Dialogue Conference (ARTSDC) that was held in Singapore from 9-10 October. Representatives of workers’ and employers’ organisations and governments from all 10 ASEAN countries used this forum for dialogue and exchange on good practices to maintain and build up social partnership in the process of technological change and ways to work together to promote investment in skills development.

On this occasion, Rene E Ofreneo, Professor Emeritus and Former Dean of the School of Labour and Industrial Relations of the University of the Philippines, presented his research on the future of work in ASEAN.

FES in Asia asked him a few questions by email.

What is the impact of the so-called Fourth Industrial Revolution on societies and workers in ASEAN?

The Fourth Industrial Revolution builds on the Third Industrial Revolution, which established global communication connectivity over the period from 1950 to the turn of the millennium. As for the earlier industrial revolutions, the First saw the growth of the factory system in the 18th-19th Centuries, while the Second gave birth to the 20th-Century mass production system and the army of blue-collar workers.

The latest industrial revolution means fuller digitization of business and other data and the application of the digital technology in almost all fields of human endeavour. There is also a fusion of cyber systems with their physical counterparts, which provides entirely new capabilities for people and machines, resulting in the emergence of breakthroughs in the fields of robotics, artificial intelligence, nanotechnology, biotechnology, the internet of things, 3D printing and autonomous vehicles.

"The technology revolution has had a dislocating or disruptive impact on business and employment, especially in industries that are most vulnerable to automation and robotization [...] farmed out in the Asia-Pacific by the multinational corporations under their global value chains such as garment sewing, footwear production, electronics assembly, auto parts manufacturing and call centres."

This technology revolution has ushered in changes in the way business is managed, including the organization of work, in all 10 countries of the Association of Southeast Asian Nations (ASEAN) and across the regional economy. These changes raise critical policy concerns on the labour front, which ASEAN governments and the tripartite social partners still have to address.

First, the technology revolution has had a dislocating or disruptive impact on business and employment, especially in industries that are most vulnerable to automation and robotization. These industries include those farmed out in the Asia-Pacific by the multinational corporations under their global value chains such as garment sewing, footwear production, electronics assembly, auto parts manufacturing and call centres. These industries have earned the region the name "Factory Asia" from the Asian Development Bank and others. The latest trend of robotization can reduce labour-Intensive jobs under Factory Asia. For example, Adidas of Germany has recently established new shoe-production facilities in Germany and the United States, which was unthinkable 10 or 20 years ago.

Second, the rules or terms of engagement in relation to new work arrangements are relatively underdeveloped in the region. For example, should Grab and Go-Jek drivers be treated as independent contractors or employees? Where are the metrics to measure and ensure fairness in transactions related to online freelance work and for those who work from home? Can those workers enjoy the rights to form unions and bargain collectively? The ASEAN tripartite social partners are in a good position, through social dialogue, to clarify the answers to these questions and formulate the rules. For example, there are policy dialogues in a number of ASEAN countries on the rates that ride-sharing companies should charge consumers, and the profit-sharing formula for drivers and these companies. Next, the dialogue should be extended to cover the voice and social insurance demands of these drivers.

Third, at the macro or societal level, the ASEAN states must face the challenge of helping all sectors of society develop the capacity to survive and prosper in the digital era. This means establishing programmes directly related to job preservation and job creation, safety nets and social protection, and education and skills development for all citizens. In particular, there should be forward-looking affirmative programmes for the excluded, especially individuals without formal banking, with limited official status, or who have no access to the internet.

New technologies are likely to lead to fundamental changes in the labour market. Do you see this as a threat or an opportunity? Why?

The new technologies are both a threat and an opportunity. Without the social and labour rules as well as a development vision shared by all the stakeholders, these new technologies can lead to labour displacements, arbitrary reorganization of business at the expense of the workers, and deeper social and economic inequality. After all, the application of any technology and how it is going to be used in society still depends on who owns and manages the technology. If these technologies are adopted and developed for the clear purpose of improving the situation of the impoverished masses, they can make a lot of difference in making this happen. For example, the modernization of agrarian practices in underdeveloped economies should put technology in the hands of the small farmers, not the big agribusiness integrators.

Some experts believe that millions of jobs will be lost and that society will become increasingly polarised. Does your research confirm this?

Policy-wise, it is critical to focus on the capacity of governments to insure some balance, to minimize social and economic pains while maximizing the social and economic gains. In particular, governments should be able to deal with the inclusion problems of the vulnerable and those excluded from formal social structures, e.g. semi-skilled and contractual workers being displaced or made redundant in the name of modernization.

Programmes such as lowering the cost of Internet access, developing Internet facilities and raising cyber literacy in poor urban and rural communities are examples of good affirmative measures on inclusion.

What is your advice to trade unions to manage the digital transformation?

The trade unions should have a deeper understanding of the technology revolution and how it is affecting industry. They should also develop the capacity to assert their collective rights to be informed, consulted and given a voice in any process of technology adoption and adaptation. At the same time, the trade unions should be able to formulate alternative policies and programs on how to preserve and create jobs while society or industry is modernizing.

A good development in the ASEAN is that there is increased appreciation by the tripartite parties on the importance of more social interface and dialogue between and among the parties on how to deal with the multi-sided ramifications of the technology revolution, such as the 9th ARTSDC.

What kind of skills will workers need in the future?

Various studies point to the importance of problem solving and socio-emotional skills, as lengthily discussed in a number of publications like the World Bank's World Development Report 2019: The Changing Nature of Work. These skills, however, should be linked to other skills needed by the workers, such as the ability to adapt to new or changing work environment as well as assert human and labour rights at all times.

In relation to all this, there is indeed logic and reason in the promotion of a rounded program of life-long learning, involving formal and informal systems of education and skills development, for the benefit of all citizens of all ages. 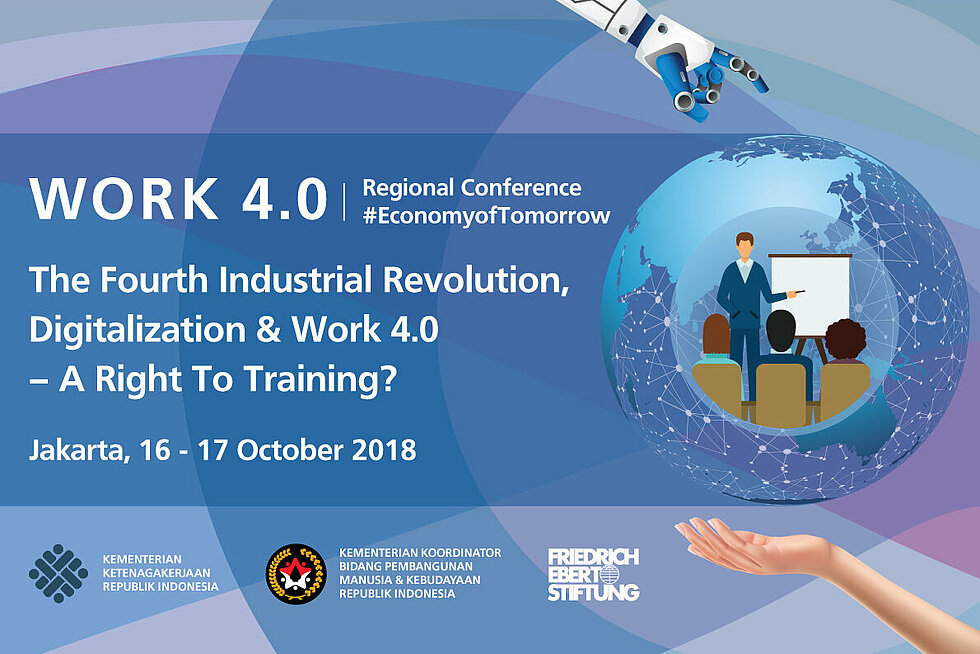 The Fourth Industrial Revolution, Digitalization & Work 4.0 – A Right to Training

How can we skill and empower the workforce in the throes of ongoing changes in the labour market? This question will be the leitmotif of an upcoming… 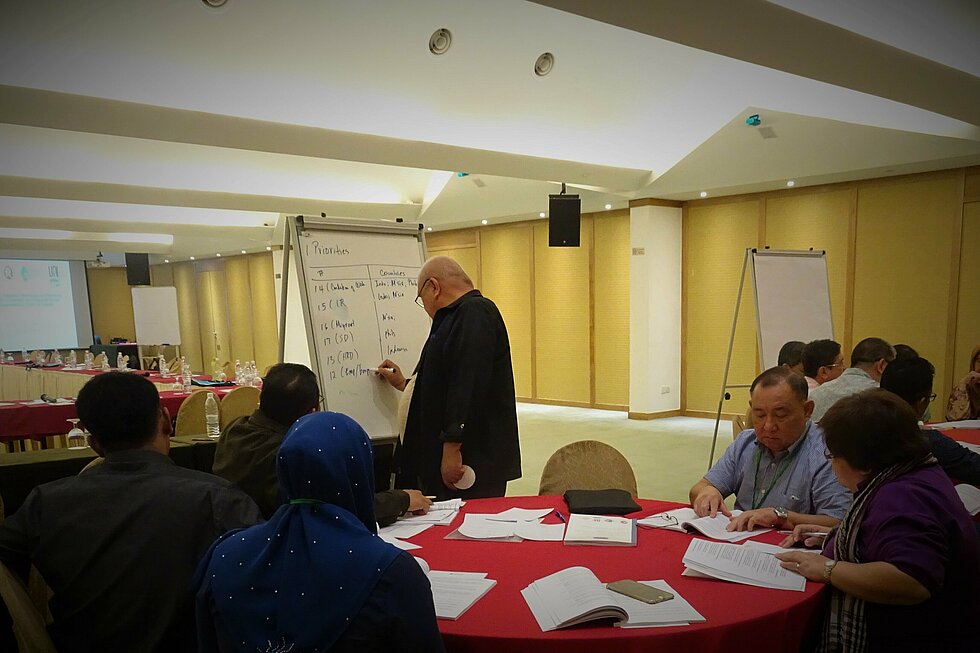