The use of targeted sanction solves the main problem with blanket sanctions—the indiscriminate impact—while preserving the most advantageous feature: their deterrent effect.

The European Union (EU) announced last week that it plans to initiate the withdrawal of trade preferences from Cambodia, and possibly also from Myanmar (link). This is big news because the EU generally displays a reluctance to employ sanctions in response to breaches of labour standards, manifested in the recent debate surrounding enforcement of the Trade and Sustainable Development (TSD) chapter of free trade agreements. It is a powerful tool at its disposal, yet the EU is highly reticent to engage with it. This is problematic because inhibition about the activation of enforcement mechanisms undermines confidence in them. The EU could solve this problem by adopting a targeted approach, and here is how.

The EU has a long-standing policy of supporting labour standards worldwide through trade instruments, such as free trade agreements and trade preferences for developing countries in the form of the Generalised Scheme of Preferences (GSP). In addition to encouraging and assisting partner countries to respect labour standards, both instruments foresee sanctions, in the form of suspension, to address severe breaches.

"Free trade agreements have never been suspended on account of breaches of labour standards, and trade preferences have been withdrawn only twice."

Technically, free trade agreements are vague about the sort of violations that can be punished—they mention breaches of human rights in general. By contrast, provisions for EU trade preferences specifically stipulate that grave and persistent breaches of the International Labour Organization's core conventions can give rise to the suspension of privileges.

Until last Friday, the activation record of the sanctions tools was extremely meagre. Free trade agreements have never been suspended on account of breaches of labour standards, and trade preferences have been withdrawn only twice: from Myanmar (then called Burma) in 1997 and from Belarus in 2007. The European Union’s reluctance to use this tool is due to well-known risks associated with sanctions: The discontinuation of trade benefits affects the entire economy of a trading partner, spreading negative effects throughout the population. On top of failing to compel the targeted government to change course, it may even exacerbate the breach. For instance, interrupting trade privileges in response to practices of child labour may worsen the economic performance of the targeted country and increase poverty, leading to increased levels of child labour.

These risks flow into the EU’s calculation, making the activation of sanctions highly unlikely: It does not want to be (made) responsible for the misery of impoverished populations, even in the face of blatant breaches of labour standards.

However, the lack of activation of sanctions despite the perpetration of severe breaches remains problematic. It undermines the credibility of the EU’s commitment to labour rights in the eyes of partner countries, depriving the sanctions of the deterring effect. Actors in third countries might be discouraged from replicating breaches if they see that they disrupt links with the EU. Conversely, the same actors may be emboldened to violate the same standards if they see that perpetrators go unpunished. The lack of enforcement also discredits the EU’s commitment to its values in the eyes of international civil society. Recently, a consortium of civil society organizations lodged a complaint with the European Ombudsman about the European Commission's reluctance to launch an investigation into well-documented breaches of labour standards in Bangladesh.

"The EU has considerable experience with imposing sanctions under its foreign policy machinery, the Common Foreign and Security Policy (CFSP). In this framework, it applies a targeted approach that consists of sanctions that single out the responsible leaders and elites while sparing the civilian population."

The solution to this dilemma can be found in another realm of EU external action. The EU has considerable experience with imposing sanctions under its foreign policy machinery, the Common Foreign and Security Policy (CFSP). In this framework, it applies a targeted approach that consists of sanctions that single out the responsible leaders and elites while sparing the civilian population. In one of its more recent episodes, the EU blacklisted Venezuelan officials over human rights violations, in addition to banning the export of arms and interception equipment. Similarly, EU legislation bans a number of Burundian individuals responsible for undermining democracy from holding assets in Europe or entering European territory. With this targeted approach, the EU has developed a rich and increasingly sophisticated sanctions practice, which relies mostly on the use of blacklist-based asset freezes, travel bans, selective embargoes and other measures tailored to inflict harm only on specific sectors.

"[A]dopting a targeted approach would correct the indiscriminate character of current sanctions, which are ill-suited to respond to labour violations."

Sanctions mechanisms embedded in free trade agreements and trade preference schemes should incorporate the notion of targeting into their design. If applied to trade instruments, this would entail penalizing those individuals and entities responsible for committing the breaches or failing to enforce legislation protecting labour standards. Notably, adopting a targeted approach would correct the indiscriminate character of current sanctions, which are ill-suited to respond to labour violations. Because labour rights violations are often committed by the private sector, the EU should have the ability to hit the perpetrators as well as the authorities who fail to prosecute them. With the help of blacklists, the EU could single out those companies responsible for serious and persistent breaches, designating perpetrators—owners, chief executive officers and senior managers—as well as the government officials who failed to enforce relevant legislation.

The withdrawal of GSP privileges is equally indiscriminate. The list of products benefiting from preferences is determined on commercial and development grounds. Conversely, the same products are excluded from benefits when sanctions are applied. For instance, when trade preferences were withdrawn from Myanmar, the textile sector was hit hard despite its lack of connection to the ruling military junta. Nothing allows for preferences to be maintained for innocent operators.

At present, the GSP regulation contemplates the possibility of suspending preferences from a specific sector, even though this option has never been utilized. Introducing the possibility of blacklisting specific companies would further refine the mechanism, transforming it into a "precision-guided weapon".

"The use of targeted sanction solves the main problem with blanket sanctions—the indiscriminate impact—while preserving the most advantageous feature: their deterrent effect."

The fact that the transfer has not been contemplated yet probably owes to the compartmentalization of EU bureaucracy and the scarcity of communication between different sections therein. But if the EU were to adopt a targeted approach to sanctions in support of labour standards, it should be aware that the process will need extra allocation of time and resources.

The crafting of targeted sanctions requires a thorough analysis of actors in the countries concerned and their role in domestic economic power structures, as well as a full investigation to ascertain their specific responsibility in the breach. In turn, the findings of a lengthy and exhaustive investigation are likely to be sufficiently robust to withstand scrutiny by the Court of Justice of the EU, which is a most salient challenge facing current CFSP sanctions.

Transferring the targeted approach from CFSP sanctions to trade instruments would render free trade agreement and GSP sanctions more deployable, enhance their credibility and reassure civil society. The use of targeted sanction solves the main problem with blanket sanctions—the indiscriminate impact—while preserving the most advantageous feature: their deterrent effect. Their availability creates, in the minds of potential perpetrators of major breaches, anxiety about the possibility of being targeted.

Clara Portela is author of "Enforcing Respect for Labour Standards with Targeted Sanctions" (link to download), an FES-supported paper, published as part of Core Labour Standards Plus (CLS+), a regional project linking trade and decent work in global supply chains. For more information on the project contact Veronica Nilsson, programme manager at the FES Office for Regional Cooperation in Asia. 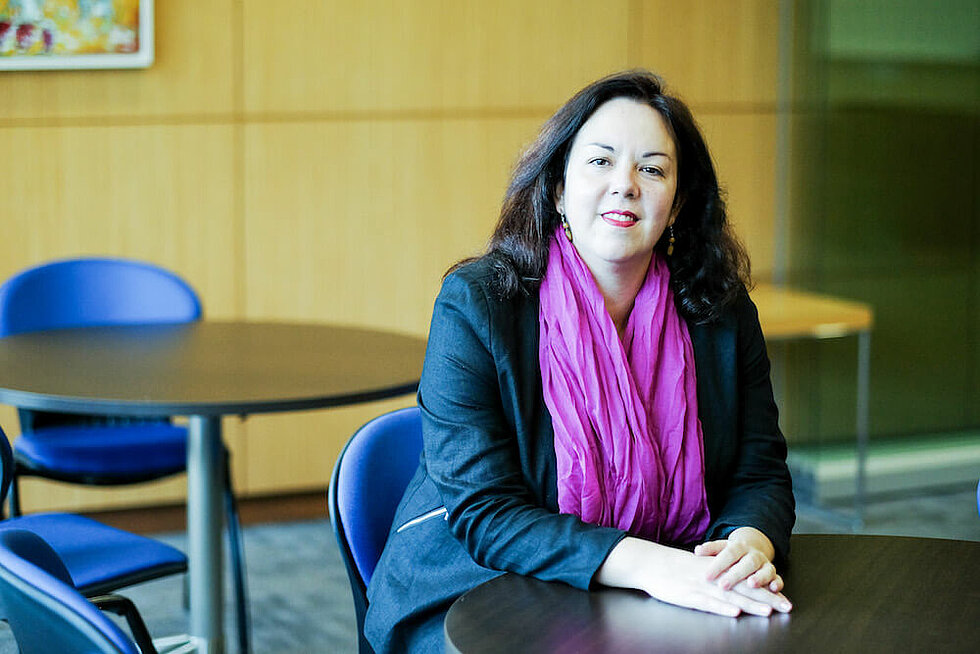 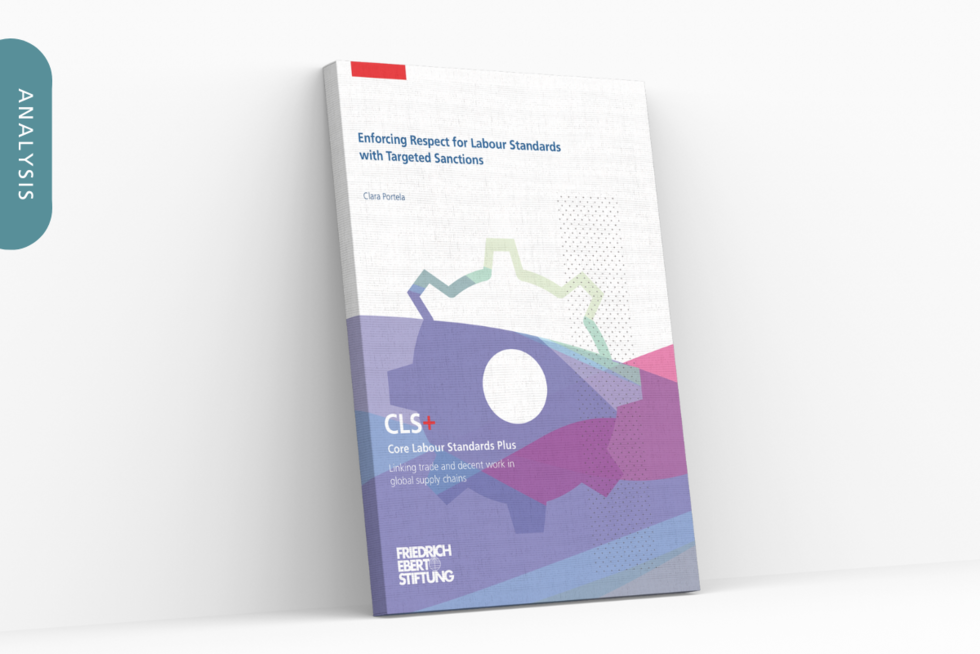