Event announcement: The debate over the post-COVID future is in full swing. Join us to discuss the agenda for trade unions and social justice across the Asia-Pacific region! A web talk series jointly organized by the ITUC-AP and FES Asia every Wednesday starting 24 June.

The pandemic has hit workers in Asia and the Pacific extraordinarily hard: Hundreds of millions have lost their jobs and many essential and vulnerable workers are exposed to major risks to their health and livelihoods. Together with union leaders, policy makers and experts, we will discuss the different pathways and facets of a just and equitable future for workers during and after the pandemic.

for our final session on "After the pandemic: Visions for new economic and social systems".

This concluding session of our series and will take a look at the long term systematic change, goals and how to get there. The goal of the session is to take a broad a look at what priorities will matter in the aftermath of the pandemic. What are the defining trends for the betterment of workers lives across Asia and the Pacific region? What are the overarching visions and ideas for the years and decades to come?

U Maung Maung, is the President of the Confederation of Trade Unions of Myanmar (CTUM). He was the founding member of the Myanmar Germs Mining Union in 1988 when he was forced to leave his country due to his struggle for workers’ rights and democracy. During his exile in Thailand, he relentlessly continued his struggle for workers in Myanmar at the international and regional levels with the Federation of Trade Unions of Burma (‘CTUM’ now) established in 1991. In 2012, after 23 years exile, Maung Maung returned to Myanmar. His struggle has never stopped there. In 2015, 3 years after returning home, the CTUM was officially recognised as the federation to represent all Myanmar by the government of Myanmar. He is an eminent expert and authority on human and labour rights in Myanmar, well recognised internationally.

Farzana Nawaz is an independent consultant working on labour rights in South and South-East Asia. Her areas of expertise include working conditions in apparel supply chains, migration, future of work and good governance. Farzana has worked on capacity development of women-led grassroots labour rights organizations in the garment sector in Bangladesh. As a consultant, she is currently supporting the development of Laudes Foundation’s Labour Rights portfolio in South-East Asia. Farzana is also a member of the FES working group on women and the future of work, which investigates the impacts of digitalization and automation on women across the Asia-Pacific region.

This is the final session in our five-part series on "Decent work for all: A post-COVID union agenda".

You do not need to register again if you have already indicated your interest in this session when you registered for the first session of this web talk. 24 hours before the start of the event, we will send you the invitation link for the Zoom session via your registered mail. 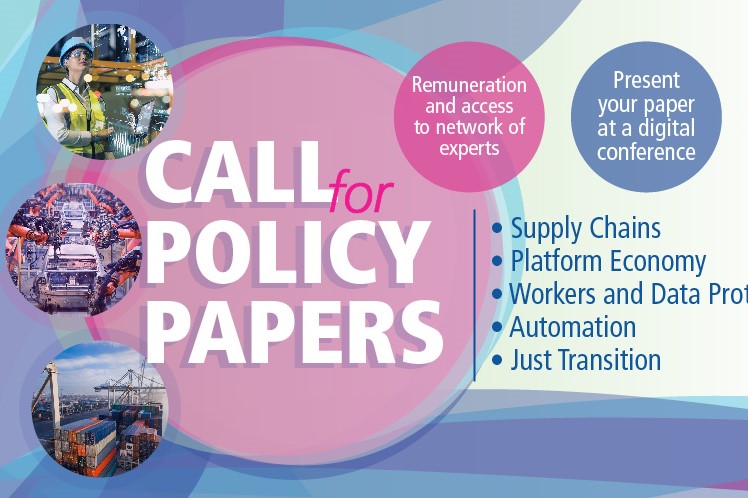 Call for Papers: Post-Corona Visions for the Future of Work in Asia

Become part of our research and policy network and help us rethink the future of work in Asia during and after COVID-19. Take a look at our focus…